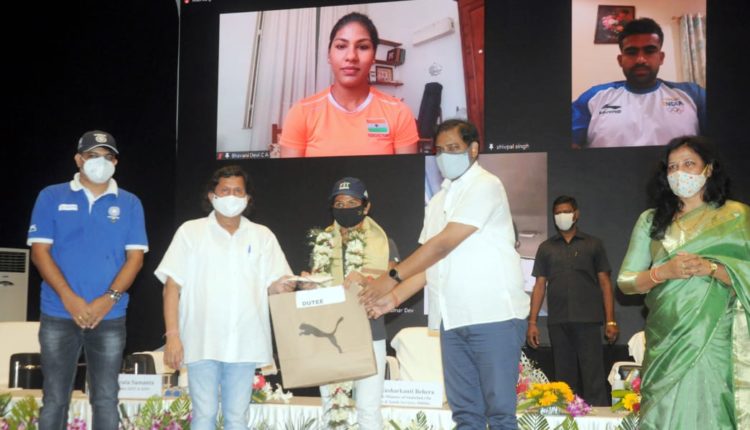 Bhubaneswar: In a unique feat, KIIT Deemed to be University will be sending four representatives to the Tokyo Olympics.

Three athletes – Dutee Chand, CA Bhavani Devi and Shivpal Singh – and sports medicine doctor Dr Sudeep Satpathy are part of the Indian contingent that will take part in the Tokyo Games from July 23 to August 8. 2021.

Introducing the quartet at a virtual felicitation and press meet on Sunday, KIIT and KISS Founder Dr Achyuta Samanta said that KIIT is India’s only university to send three athletes and an official to the Olympic Games.

Sprinter Dutee, a law student at KIIT, qualified for Tokyo in women’s 100m and 200m on the basis of her world ranking. It will be her second successive Olympics and she is set to be the only Indian to participate in two events twice in the quadrennial Games.

Dr Samanta announced that Dutee will be presented two gifts on her return from Olympics, and committed that KIIT will continue to support the sprinter as in the past.

Bhavani Devi, who is pursuing a Ph.D. degree at KIIT, is the first ever Indian fencer to qualify for the Olympics. She qualified for women’s sabre event at Tokyo through Adjusted Olympic Rankings, following the World Cup in Hungary in March 2021. Ranked 42nd in the world, she became the first Indian to claim gold medal at the Commonwealth Fencing Championship in Australia in 2018.

Javelin thrower Shivpal Singh, a BBA student at KIIT, made the cut for his maiden Olympic Games by achieving the qualifying mark with a throw of 85.47m at a South Africa meet on March 9, 2021.

Dr Satpathy of Kalinga Institute of Medical Sciences (KIMS) has been named doctor of the Indian men’s hockey team for Tokyo. A specialist in Clinical Physiology including Sports & Exercise Physiology, Dr Satpathy was Sports Medicine Doctor in 2016 Rio Olympics.

KISS has produced over 5000 sporting talents at the state, national and international levels, many of whom have won medals for the country at Commonwealth Games, Asian Games and World University Games.

A number of KIIT students have also brought glory for the institution, state and country with their performances at various national and international events.

Tusharkanti Behera, Odisha’s minister for Sports & Youth Services and Electronics & Information Technology, was the chief guest at the virtual ceremony.

Career In Public Health At AIPH University In Bhubaneswar