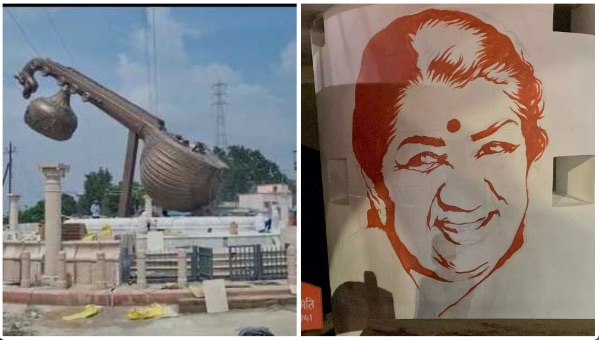 According to media reports, the inauguration ceremony in Ayodhya will be held in presence of some of her family members.

A 40-ft-long and Indian classical music instrument, ‘Veena’, weighing 14 tonnes, has been installed at the crossing and wall art of the legendary singer on the opposite side. The veena has been designed by Padma awardee Ram Vanji Sutar, who also designed the ‘Statue of Unity’ (the world’s tallest statue) in Gujarat.

Noida-based architect Ranjan Mohanti has designed the Lata Mangeshkar Chowk, where famous bhajans sung by the legendary singer will also be played.

On the occasion, cultural events will also be organised at Ram Katha Park.

Prime Minister Narendra Modi is expected to attend the event virtually. Remembering the legend, he tweeted: “There is so much that I recall. The innumerable interactions in which she would shower so much affection. I am glad that today, a Chowk in Ayodhya will be named after her. It is a fitting tribute to one of the greatest Indian icons,” he tweeted.

The legendary singer died on February 6, this year, at the age of 92.