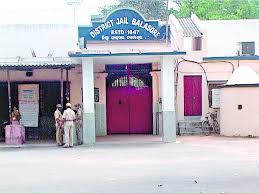 Balasore/Boudh: A day after an untertrial prisoner (UTP) was bludgeoned to death by an inmate at Balasore district jail, two warders were suspended for alleged dereliction of duty on Monday.

According to the sources, jail chief warder Sanjeev Panda and warder Dilip Mohaptara have been placed under suspension.

Notably, an UTP, identified as Ramachandra Das (53), died after allegedly being attacked by inmate Sharat Giri inside Balasore jail on Sunday.

Arrested by the Excise Department on October 9 in connection with illegal liquor trade, he was brought to the jail four days ago.

According to the sources, Sharat Giri, who is serving life sentence, attacked Ramachandra with a brick inside the jail.

He suffered haemorrhage and was rushed to Balasore district headquarters hospital for treatment. He, however, succumbed to his injuries while being shifted to the SCB Medical College and Hospital in Cuttack.

The reason behind the attack is yet to be ascertained, the sources added.

The UTP has been identified as Gopal Biswas of Chabispragana of West Bengal. He was ill and admitted to the hospital on Sunday.

Notably, he had been behind bars since last May for trading ganja illegally.

The police has started investigating the matter.