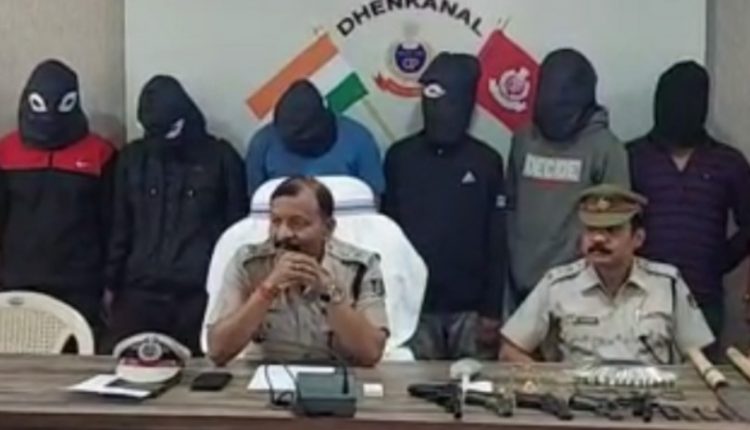 Dhenkanal: A 5-member dacoit gang, which was wanted by police for their involvement in several cases for a long time, has been arrested.

Speaking to media persons on Tuesday, Dhenkanal district SP Gyan Ranjan Mohapatra said the five members of the gang were intercepted by police while they were going on a motorcycle and a car at Jhargadia under Dhenkanal Sadr police limits on National Highway 55 on Monday night.

On suspicion, the police team searched the vehicles and found a gun, a sword, a packet of chilly powder and 24 gram of brown sugar. The police detained them and verified their identity.

During questioning, they admitted to their involvement in many cases of loot, burglary and extortion in Dhenkanal and its adjoining districts. While three of them belonged to Ganjam, one is from Banki of Cuttack and another from Dhenkanal.

The police also conducted a raid on a place in Cuttack on the basis of the gang and recovered several looted goods. Those included gold jewellery, CCTV hard disc, a TV and Rs 25,000 in cash. These included materials that were looted from the house of Ranjana Tripathy in Dhenkanal Sadar area on December 24 last year. A case in this regard was registered at the time.

The SP said the 5 persons also revealed that they had formed the gang while they were in jail in connection with different crimes some time back. While another person, who was associated with the gang, has also been arrested.

One of the gang members has been identified as a supari killer and investigation is on to other persons associated with the gang, the SP added.