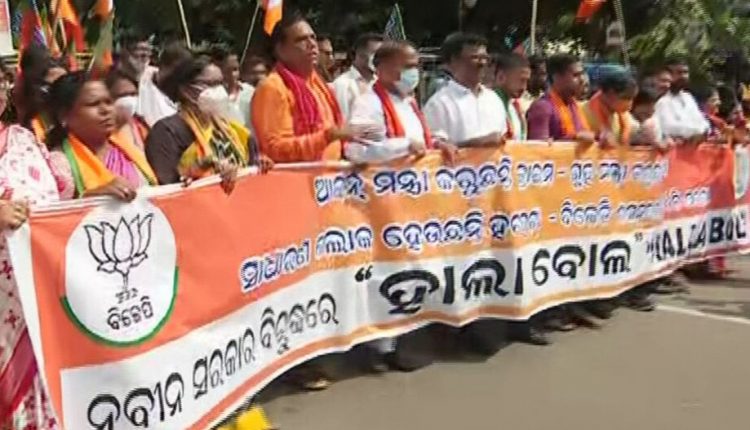 “Despite attending an event, the CM does not speak and only his video message is played on the screen. He does not even meet the people and scribes,” he told a presser while referring to Naveen’s BSKY smart card distribution programmes in Odisha.

Mohanty also accused the ruling BJD of misusing District Mineral Foundation (DMF) funds. “The revenue collection was Rs 13.728 crore till 2020-21. The funds are being spent without floating tender and for political campaigning,” he alleged.

Instead of seeking additional allocation of rice under Pradhan Mantri Garib Kalyan Anna Yojana (PMGKAY), the government should use DMF funds to benefit the beneficiaries under the NFSA, he added.

In tandem, the BJP launched ‘halla bol’ agitation against the ruling BJD government, protesting against the silence of the CM over the alleged complicity of Minister of State for Home Dibyashankar Mishra in Mamita Meher murder case.

Leaders and workers of the saffron party took out a massive rally from Raj Mahal and marched towards Naveen Niwas.

BJP Bhubaneswar organisational district president, Babu Singh said that the ‘halla bol’ agitation is against the 21-year- old government and Naveen Patnaik, who has maintained a stoic silence over the issue.

Three workers in the rally were seen with their hands tied and donning the masks of Chief Minister Naveen Patnaik and Ministers Pratap Jena and Dibyashankar Mishra.

BJP leader Dillip Mohanty said people are miffed with the government’s inaction and a day will come when people of the state will handcuff the ministers and drag them to the streets.

The BJP workers, however, were stopped mid-way by the police at Sishu Bhawan Square. A scuffle ensued and several activists were picked up by the police when they attempted to breach the barricade.