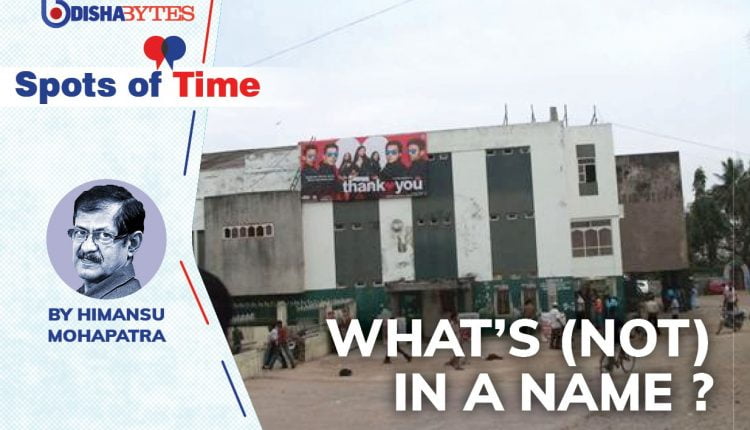 That was college time. And a fantasy-laden, violence-ridden time it was. Please don’t get me wrong. The violence was not so much out there in the street as it was in the crevices of the mind. And the fantasies, well, they oozed out of the three cinema houses of Baripada, Jagadhatri, KMBM and Roxy, and woven around Hindi film actresses, especially the item number performers. It was at a time like this that my cousin and co-fantasist broke to me, with a chuckle, the news of the conquest of Kali.

I was unable instantly to place a figure conjured up through a nickname which could as easily slide from a human to a cow in the Odia scheme of things.

“Kali, daughter of Dulia and tailor Daya. Don’t you remember? From our sahi more than ten years ago.” More nicknames, more flashes of vague shapes and faces, but it did ring a remote bell.

“Who else, the prince and his gang.” He then went on to paint a picture of the assault in the newly-built Jubilee Park in the town’s western flank.

Apparently Kali had consented. Prince and his friends had this distinction; they hunted young and vulnerable girls in the town, buying their consent with money. Needless to say, he went under the alias of Prince because of the grand way in which he carried himself, having his way with his victims and paying them after having used them. He was the scion of one of the richest men in the town, the very type portrayed in the figure of Motisil in the novel ‘Chhamana Athaguntha’, the guy who rose from selling empty bottles to become a ‘crorepati’ of Kolkata.

But did they have to pick on Kali? This knife had cut closer to the bone. The memory of that different time blew through me like a keen, cold blast. It seemed so far back in the past, that sensuous world of nicknames, but surely it had left an impression, judging by the hurt and shame I now felt. I was seeing before my mind’s eye a narrow dust lane lit by softer rays of the setting sun and dotted with shouting children at play.

“No, Kali is on our side along with Tunu and Talu.”

No, Rumu, you had Kali on your side yesterday. The team has to change today.”

“No, nothing doing. We shall decide it with ‘ada mada lagam chada’,” said my cousin, as he started the rhyme which ended as usual with the ‘fart’ at the end of the third line falling on me, marking me out as loser both in the wager and the game of bohu chori that was to follow.

It was axiomatic that a side minus Kali would lose. She excelled in playing the bashful bohu who would run away lightning-fast from her captivity in her in law’s place when no one was looking.

Childhood in Tala Sahi in the 1960s was real fun. Every one of the boys and girls cradled in it had a nickname which became that person. Like Kali meant the dark girl. Even Tala Sahi was itself a nickname. It meant the place down below literally, but in its implied contrast with the place up above, the Upar Sahi, it signified not merely a neutral lower point on a geographical scale, but a figurative lowered state of existence on a human scale as well. Thus when the two Sahis met each other at a Sunday game of football or cricket, played with the makeshift bat and a rubber – tennis ball was a rarity – ball, on some neutral ground, the air resounded with the victory chants of Upar Sahi members, mostly boys, upon their decisive triumph over the Tala Sahi. We from down below were made on these occasions to regard the name of our locality as a badge of shame that we were doomed to wear on our person.

But, of course, this outsider’s view was duck’s water for us. Tala Sahi provided a setting that was cosy enough to render an external viewpoint unnecessary. If anyone needed converting, it was the outside observer before whose eyes unrolled a picture of human warmth and snugness. Morning mists rose from the Sukjuda River which marked the end of its very short spread in the east. Wisps of blue smoke rose in the evenings from the two rows of terraced but thatched houses which formed the human hub of the Sahi. In between the rows ran a narrow, dust lane which doubled as a passage and a play area. It was in this non-descript lane that we had our glorious dust baths in the late afternoons as we played our various games. Kali shifted between these games as easily as a doe. She belonged to the lane.  The thought of the same girl being meted out such a brutal deal was upsetting.

I had had a fleeting glimpse of her near the Market Square about a month before the incident. As usual it was the prospect of the late afternoon chunky bite of samosa, vada and fritter which had brought me and Bijay, a college friend, to the Market Square where Nalu had newly set up his push cart. This make-shift and mobile food cart was something of a novelty in Baripada in the late seventies, being the earliest version of what is now known as a fast-food counter. The special twist Nalu gave to the fried savories by frying them a shade deeper and by pricing them a little lower meant that the concept had caught on.

As I stood near the cart that evening, eating, I saw Kali. I didn’t of course recognise her instantly. Her family had moved out of our Sahi more than a decade ago and had not been seen or heard of since then. The clue to the recognition was her dark face and those large soulful eyes that still had in them that hint of mischief.

The resemblance, of course, stopped short here. In every way other than the purely physical, the passage of years told the story of an unremitting fall. Nature’s smooth course had been scoured over. Kali had moved out of the frock to the blouse and ghagra. The carefree player had become a responsible child minder, as was proved by the two brats she had in tow. If she had become a beauty, it was the kind of beauty which was wont to attract thieves.

She came with her charges up to the food cart and our eyes met for a brief moment before she averted them. I just had time to catch in that averted gaze a flicker of recognition. But the meaning of that was not lost on me. It was a ruse to ward off the prying eyes of those similar-looking yet differently acting creatures called males. No word was exchanged between us on that occasion.

It would, of course, have been unavailing if there had been. It was only a matter of time before the eyes of the marauding band fell on her. They would simply have had to wait for a goof-up with the baby-sitting, cleaning or scrubbing job to occur and then, when the hapless young girl was cast out onto the street, would have moved in for the kill. Nothing could have prevented that. But what was it that brought her to this pretty pass in the first place? Why did she not turn out like my cousin sisters or my friends’ sisters? Why did she move from the frock to the blouse-ghagra, and not to the respectable salwar-kameez, especially when we had started out from the same place?

I remembered the placing language we used: daughter of Dulia, daughter of tailor Daya. It was at bottom a naming problem. Her not having, unlike us, a pair of names, one for home, called a nickname, and the other for outside, the good name, put her beyond the pale. Dulia and Daya and a few other families who shared our social space in the sixties had to leave our Sahi to make way for more civilized people, the possessors of ‘good names’.

The hearthside talk of our parents, as it told us of Dulia’s death from a miscarriage, Daya’s taking up of another woman, and the eventual breakup and scattering of the family, went on from being concerned to matter of fact to finally uninterested. As for us, we were becoming too centred in ourselves to care much about what happened to those on the edge. Kali, her sister Mena and her two brothers soon faded from my mind. This coincided with my stepping out from the dust path on to the road that led through Upar Sahi upwards and forwards to M K C High School and then to M P C College. New people were moving into the neighbourhood and more imposing structures were taking the place of the thatched houses. That childhood world of games and nicknames fell by the wayside. From the very start then Kali and I were headed for different destinations even as we ran in the same direction, kicking up clouds of dust.

In course of the evolving naming game, she had been nailed to the base level of the nickname.