[Watch] Cobra Rescued From Under Motorcycle Seat In Bhubaneswar 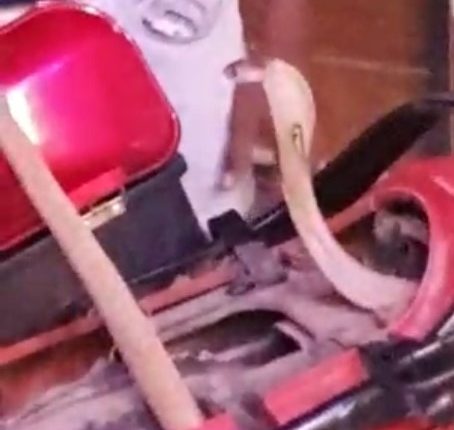 Bhubaneswar: A cobra was rescued from under the seat of a motorcycle in the outskirts of Odisha capital on Saturday.

G Nagarjun Reddy first spotted the snake in the garden of his house at Tandilo village near Satyabhamapur on the outskirts of Bhubaneswar. Alarmed by the snake, which was quite long, he went inside the house to call his family members and friends.

By the time they arrived, the poisonous snake had gone away from the spot. They searched for it around the garden and all possible places of the house but could not find it. Suspecting that it might have sneaked into some hideous place, Reddy called Snake Helpline.

Around 15 minutes after the call, Biranchi Narayan Acharya, a member of the Snake Helpline, arrived at Reddy’s house. He also searched for the slither but failed to trace it.

Cobra Rescued From Under Motorcycle Seat In Bhubaneswar – YouTube

On the suspicion that the snake might have gone into the chamber under the seat of a motorcycle, parked on the premises of the house, Acharya carefully opened it. Luckily, the snake was sitting inside it.

Acharya managed to catch hold of it and bring it out of the place. He identified it as cobra that measured around 4 feet in length. Later, the Snake Helpline member kept the cobra in his bag and took it to release in a natural habitation.