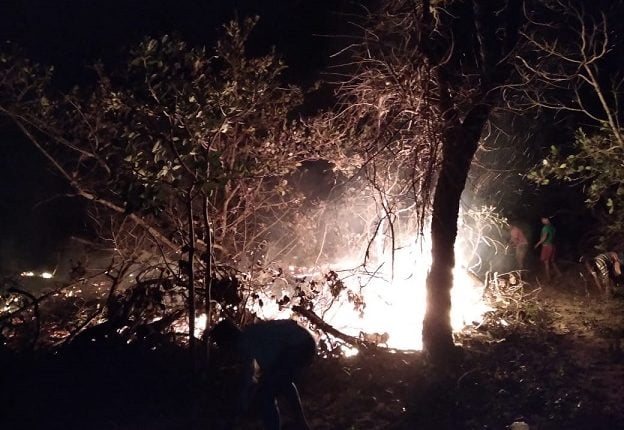 Puri: Videos of the fire that destroyed hundreds of casuarina trees along the Puri-Konark Marine Drive on Wednesday night have emerged.

The fire swept through Beladala forest under the Balukhand Forest Range. Officials said casuarina trees on eight-10 acres were destroyed in the fire.

The blaze was brought under control around 1 am on Wednesday night by forest officials and firefighters helped by locals after battling the flames for several hours.

On Friday, smoke was still rising from the charred trees and branches of wood continued to smoulder. Forest officials are on alert and constantly monitoring the situation. Fire tenders are spraying water as a safety measure.

The cause of the fire is under probe and still not known.

The forest along the Marine Drive is popular with picnickers. So, it is suspected that some picnickers may have left the fire, they lit for cooking, burning after they left the place, which later spread across the forest.

Forest officials also suspect that the blaze might have spread from dry leaves that caught fire from a burning bidi stub thrown by someone.

The Puri-Konark Marine Drive is an ecologically sensitive belt.

After Cyclone Fani flattened lakhs of trees on either side, environmentalists had warned that the Marine Drive could be swallowed by the Bay of Bengal if large-scale plantation was not taken up on a war-footing.

The forested patch along the Marine Drive also act as a buffer for the coastal belt from frequent cyclonic storms, protecting villages from high-velocity winds and destruction.