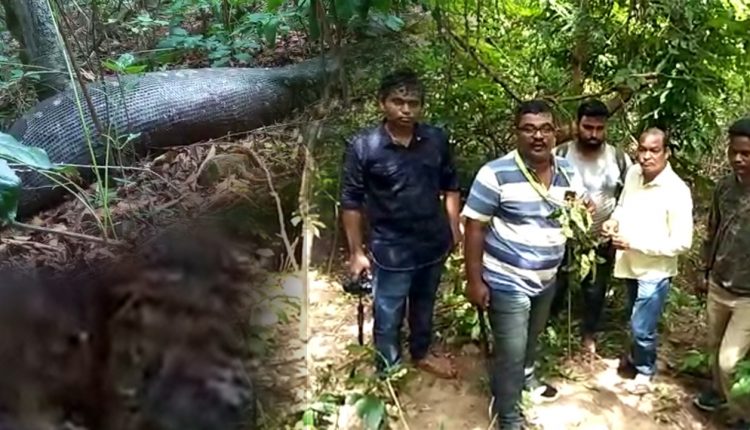 Cuttack: Forest officials and snake experts have rejected as hoax the reports that a huge Indian python allegedly devoured a 70-year-old man, who went missing around four days ago in Odisha’s Chandaka forest area.

On getting information about the elderly man missing and his moped lying near a hilly road on August 29 morning, forest officials of Damapada Range under Chandaka Wildlife Division rushed to the spot. It appeared that the two-wheeler had skidded off the road and fallen into a gorge, sources said.

The family members of the missing man along with villagers searched for him for about four hours in the forest. They then went up to Deula Mundia hill and spotted the python with a heavy bulging stomach, perhaps due to swallowing a deer or wild boar or goat, they said.

The villagers, however, thought that the python might have swallowed the missing man and soon the news spread. After a video about the episode went viral on social media, forest officials invited the Snake Helpline for a thorough probe. A five-member team of the Snake Helpline which visited the site along with local forest personnel termed it a hoax.

The Snake Helpline team first visited the spot where the moped was found. Subhendu Mallik, General Secretary of Snake Helpline, said traces of petrol were found on tree leaves near the spot.

The distance between the two spots is too far for a python to cover after a heavy meal. The pythons generally take rest for a month after consuming a heavy meal. They venture out of their hiding place only after the prey is fully digested, Mallik said.

Therefore, the hypothesis of the python having swallowed the missing man cannot be accepted, he said. Police should probe properly and focus on other possibilities like crime or the involvement of any leopard.

Mallik also pointed out that the sniffer dog went in the opposite direction of the hilltop where the python was sighted.

Range Officer of Damapada Range Biraja Das said, “We do not endorse the theory of the python devouring the man on one hill and then climbing up to another hill two km away.”

Mallik said there is no need to capture or kill the python and dissect it to ascertain the truth. If needed a simple X-ray will do, he added.