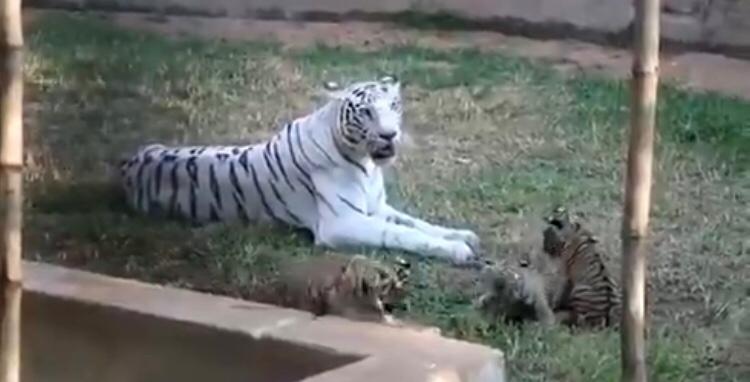 Bhubaneswar: With Nandankanan Zoological Park (NZP) shut to vistors since May 1, the COVID-19 lockdown has come as a blessing for the animals in the zoo on the city outskirts.

According to zoo sources, the animals seem to be enjoying the minimal human movement and calmer atmosphere.

The sources give the instance of the three newborn cubs of white tigress Vijaya in cage no. 34.

The three cubs were born in the last week of March. Since then, their eyes have opened completely and they run around the enclosuew all day, indicating their health is stable, the sources said.

Similarly, the bears too are having a field day in their cages by playing around with each other.

In another development, five bear cubs were recently rescued from a cashew orchard near Gangapada toll gate on the outskirts of Bhubaneswar and brought to the zoo,

On April 22, some locals found two bear cubs in a cage and three others moving outside at Gangapada.

They alerted forest staff, who rushed to the spot and rescued the cubs. The hungry cubs were fed milk and then shifted to Nandankanan zoo.