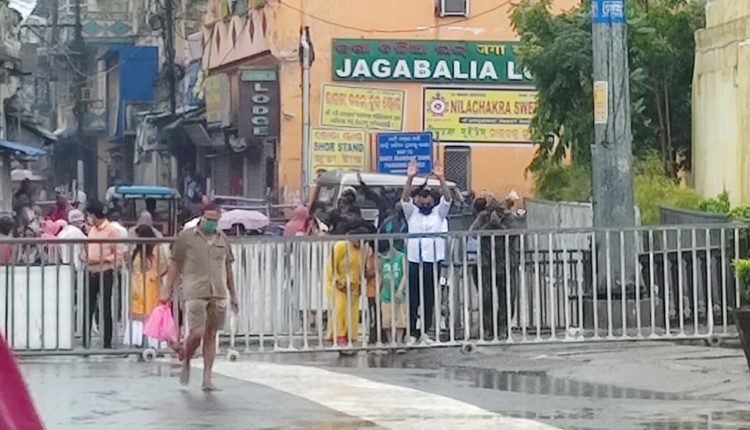 Puri: A man drove his four-wheeler to the Arun Stambh (Sun Pillar) at the entrance to the Jagannath Temple in Puri, he along with his family alighted from the vehicle and offered obeisance on Tuesday afternoon.

The man, yet to be identified, managed to break the police cordon and enter the highly restricted zone of the town barely two days ahead of the Snana Yatra of Lord Jagannath and his siblings.

Puri SP Kanwar Vishal Singh had also held a review meeting to discuss the security arrangements during the bathing rituals of the Trinity, said sources.

The police and district has banned movement or parking of vehicles in front of the Arun Stambh since long and the restrictions have been further tightened in view of the annual Rath Yatra and the rituals preceding it.

In a video, the man can be seen reaching near the Arun Stambh along with a woman and two children, parking the vehicle there and offering  prayers even as it rained in the city today.

A policeman guarding the area was seen approaching them holding an umbrella. After some time, the four people drove off.

Puri SP Kanwar Vishal Singh said a probe will be conducted into the incident.

“We are inquiring into the incident to ascertain if there was any security lapses. Questioning is underway to identify the person. Preliminary inquiry revealed that due to rain, the road was blocked so they reached there. It is not a big issue and we looking into details,” Singh said.

Earlier, the administration had announced that prohibitory orders under Section 144 would be enforced from June 23 night to June 25.

Security Beefed Up In Odisha’s Puri For Large Turnout…