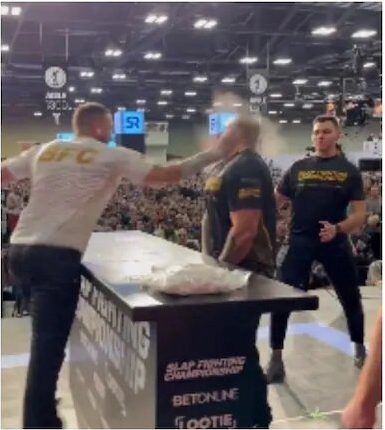 New Delhi: The video of a Slap Fighting Championship that has gone viral online has prompted a wave of reactions from netizens.

The bizarre championship was live-streamed on Fanmio and Paul’s YouTube channel and Facebook page on March 5. It was kickstarted by the popular Arnold Sports Festival, which was founded by actor Arnold Schwarzenegger. It was hosted by Logan Paul, a professional boxer.

In the short video posted by Logan Paul on Twitter, a participant can be seen slapping another man hard. Due to the impact, he falls down on the floor while two men behind catch him. Logan can be seen looking shocked and Arnold Schwarzenegger himself can also be spotted in the clip.

The contest required the competitors to face each other and slap for 30 seconds. It consisted of three rounds and the first person to flinch lost a point while the other one who remained unfazed gained one. The championship was divided into male and female categories.

this is absurd. and happening right now #SlapFightingChampionship

“This is absurd and happening right now. #SlapFightingChampionship,” Logan captioned the post.

The viral clip triggered a wave of reactions from netizens. While some were not amused by the weird contest, some people found it to be intriguing.

“Someone could get brain damage from a single smack. How is this considered a sport?” a user wrote.

Another user commented, “This is the next Big Thing after MMA fights.”