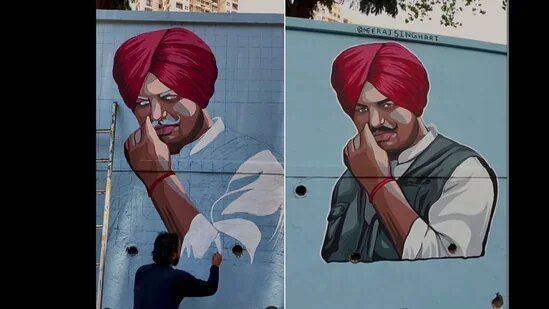 Neeraj Singh, 28, a Mumbai-based and a self-confessed fan of Sidhu Moose Wala since his breakthrough with the song ‘So High’ in 2018 was shocked on learning of his death and wanted to pay a tribute to him. So, the graffiti artist created the Punjabi singer’s portrait on a wall in his neighbourhood Mulund.

He told Hindustan Times that he didn’t understand Punjabi but loved his music and songs. “I have been a fan of Sidhu Moose Wala since his first song and have been learning Punjabi through them. I also loved his collaboration with my favourite rapper Divine. I was really shocked when I heard about his death and wanted to pay tribute to him. I was also urged by the youngsters in my colony to paint his portrait as he had a huge fan following here.”

Neeraj Singh chose a 12-foot wall in his neighbourhood Mulund in Mumbai to paint a portrait of Sidhu Moose Wala. He shared how he had to paint a base colour on the wall on the first day before painting the portrait. It took him eight to nine hours to paint the portrait.

“As soon as I finished the portrait, there were 15-20 youngsters who were clicking photos with the mural and also making videos,” he told the publication.

He posted a video of himself drawing the portrait on his Instagram account 20 hours ago. The video has got more than 2.16 lakh views so far. “Tribute to Sidhu Moosewala,” he wrote as a caption to the video.