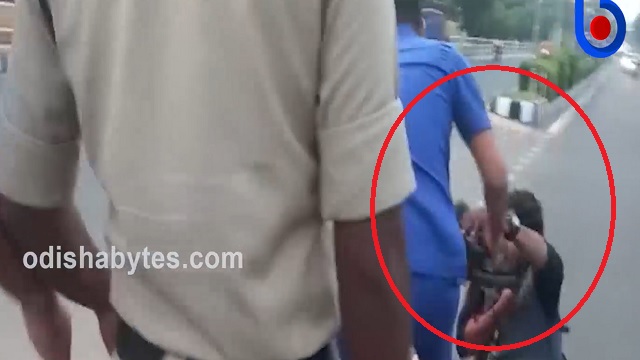 Bhubaneswar: A photo journalist was allegedly ill-treated and manhandled by a policeman outside Kalinga Stadium in Odisha’s capital. The journalist has been identified as Rakesh Roul.

According to sources, the New Zealand hockey team was on its way to the stadium when Roul tried to click some photographs on Thursday following which the enraged policeman abused him before pushing him to the ground.

“I was returning from an event when a bus carrying hockey players crossed the path. Many people clicked the players’ pictures, but when I tried to take snaps on my mobile, a policeman who was standing near the door of the bus, verbally abused me,” Roul told a local media. He added that the policeman snatched his camera and destroyed it after a confrontation.

A video of the same has gone viral over the internet which has been widely criticised by media associations in Odisha.

“It is a matter of shame that journalists are not safe in the state capital. Moreover, it is disgraceful that police who are supposed to provide protection to journalists abused Rakesh for no fault of his. Police silence, in this case, is shocking,” Odisha Union of Journalists President Prasanna Mohanty told media.

Mohanty further said that police brutality against Rakesh has been captured on camera. “OUJ will not take the case lightly and will communicate with Director General of Police in this regard. Besides, I will take the matter to Chief Minister,” he added.

Notably, a group of journalists gheraoed the office of ACP Zone 5 around 9 pm on Thursday demanding action against the Inspector In-Charge (IIC) of Nayapalli police station and other police personnel in connection with the incident.