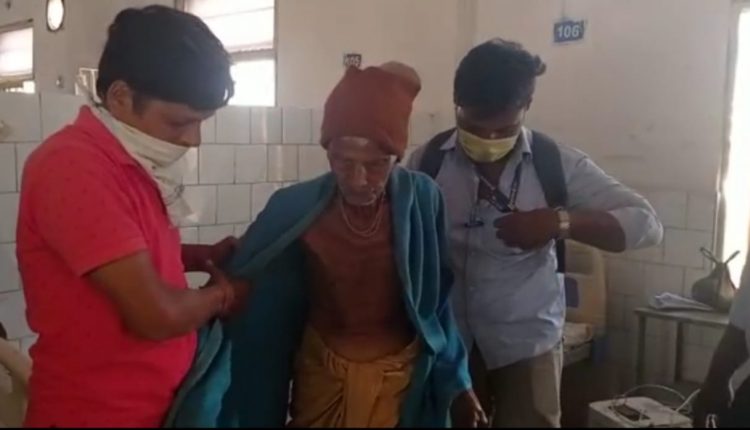 Bhubaneswar: Padma awardee Nanda Prusty, popularly known as Nanda Master, was admitted to Jajpur district headquarters hospital on Monday after he complained of acute pain in the chest.

“He had been suffering from fever and cough for the past one month. He was initially taken to Sukinda CHC, where doctors referred him to Jajpur. Pneumonia has affected the right lobe of his lung. His vitals are stable and his ECG is normal. We are waiting for the X-ray report. He will be treated accordingly,” said Dr Prabhas Ranjan Panda, Medicine Specialist.

His grandson, Khageswara Prusty, told the media that Nanda Master’s condition deteriorated after two men thrashed his father over some land dispute when he had gone out to get some medicines for him the previous evening. “He stopped eating and did not sleep the whole night. He fell down this morning and was rushed to Sukinda hospital. The doctors there asked us to shift him to Jaipur,” he added.

Nanda Master was conferred with the Padma Shri on November 9. A picture of a barefoot 102-year-old teacher from Kantira village in Jajpur, popularly known as Nanda Master, blessing the President during the investiture ceremony at Rashtrapati Bhawan had also gone viral.

Dumper Driver Runs Over Woman & Daughter After Argument In Odisha’s…

Another Person Succumbs To COVID In Odisha; Jajpur Youth Third Victim In A Week