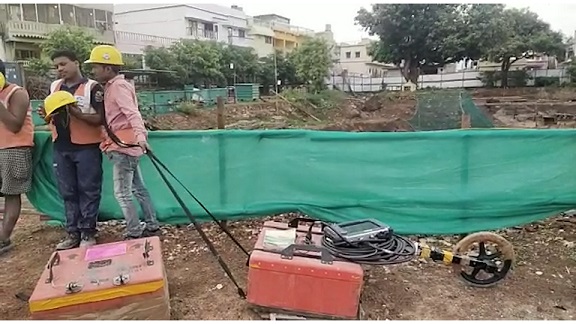 Puri: Ground Penetrating Radar (GPR) machines resurfaced on the Puri Heritage Corridor project site on Tuesday, but this time the survey is being conducted during the day.

Last week, a similar survey was carried out at the site late at night, prompting BJP national spokesperson Sambit Patra to accuse the Odisha government of hiding something by carrying out the survey “secretly at night”.

The Puri Heritage Corridor project has run into a huge controversy. The Archaeological Survey of India (ASI) has informed the Orissa High Court that the state government did not take its permission to undertake the project, for which the government has already carried out massive digging and construction.

The ASI, in its affidavit to the High Court, submitted that no GPR survey was conducted to ascertain the archaeological and historical importance buried in the subsoil of the 75m radius of the Jagannath Temple before the project commenced.

The GPR surveys, last week’s and today’s, whether late night or during the day, has only fuelled the controversy further and raised more eyebrows.

On Tuesday, GPR survey was carried out near the Emar Mutt. The survey is being conducted by Geocarte Radar Technology Private Ltd on behalf of IIT-Gandhinagar at the behest of the Odisha Bridge and Construction Corporation (OBCC). Five engineers and eight employees of the company are conducting the survey using three machines. The institute has been asked to complete the survey in five days. The final report is likely to be submitted to OBCC soon.

Last week, questioning the “late-night” GPS survey around the Jagannath Temple, Patra alleged that the government was carrying it out now on the sly to cover up its lapses. “The area was dug up using JCB machines late at night without conducting a GPR survey and now, again, the survey is being undertaken away from public glare at night,” he alleged.

Patra also accused Puri MP Pinaki Mishra of lying that GPR survey was done before digging was undertaken. The BJP leader had a war of words with Mishra, whom he accused of “misleading” people. Mishra had tweeted that GPR survey of the heritage corridor had been done and the report will be submitted to the High Court as an affidavit.

“Documents will show GPRS was duly done and therefore allegations about digging without GPRS are baseless. HC affidavit will clarify all these aspects. All that’s needed is a little more patience and a little less malice,” Mishra had tweeted.