Oregon: After his gold medal at the Tokyo Olympics, Neeraj Chopra clinched silver in the men’s javelin throw final at the World Athletics Championships in Eugene, Oregon, on Sunday with a throw of 88.13m.

Chopra became only the second Indian to win a medal at the World Athletics Championships after long jumper Anju Bobby George.

Chopra’s best throw of 88.13m came in his fourth attempt. He began with a foul throw and registered 82.39m in his second attempt. In his third attempt, he improved with 86.37m.

His fifth and sixth attempts were foul throws. 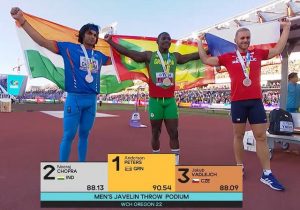 • Wins 🥈in Men's javelin throw at @WCHoregon22 with his best throw of 88.13m, becoming the 1st Indian male and 2nd Indian to win a medal at the #WorldChampionships!

Neeraj has now won medal at every Global event !

Chopra said he was satisfied with the result.

“While conditions were not good and the wind speed was too high, I was confident I would perform well. I am satisfied with the result, I am happy I was able to win a medal for my country,” he said.

“I am feeling very happy today as I won a silver medal for the country. I will try to better at the World Championships next year. I also want to thank SAI, TOPS, Athletics Federation and the government of India for supporting me and allowing me to train abroad. I hope that we’ll get the same support in other sports so that we can make India proud. Thank you,” he added.

Former long jumper Anju Bobby George was the first Indian to win a medal — bronze — in the World Championships in 2003 in Paris.

#WATCH | I will give my best in the Commonwealth Games, says India's Neeraj Chopra after landing the silver medal in the World Athletics Championships, speaking with ANI pic.twitter.com/9MtHUHYDqL