When A Bypoll Is Not Just A Bypoll But Much more 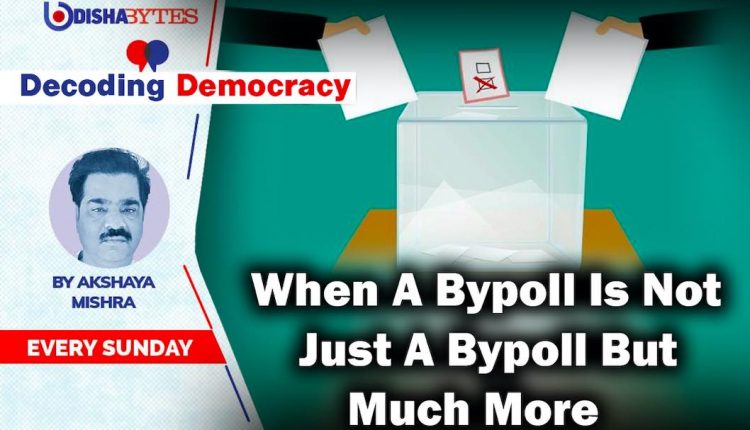 A by-election either to a parliamentary or assembly constituency used to be a low-key affair a decade ago. It was to a great degree a local election. The top brass of parties didn’t get fully involved on the ground and party workers were less charged than they would be in bigger elections. The ruling party usually won. The result and the run-up to it generated some excitement if the government was precariously positioned with a wafer-thin majority in the house or a big shot was in the fray. A single column mention on the front page of newspapers is what the winner earned.

How things have changed! Just wind back to the frenzied build-up to the polling day in the recently concluded by-elections in Dhamnagar and Padampur seats in the state, and you realise no election is a trivial matter for parties anymore. Each, from local to national, is a matter of prestige for all major contenders and not an inch of political space would be ceded without a fight. War rooms, well-laidout strategies beginning from the booth lebel, hordes of star campaigners, roadshows, big rallies, intense media propaganda, engineered defections, big claims and counterclaims and whatnot. You get all in a bypoll that you get in a general election in a truncated manner.

This is interesting, considering the position of the legislator has generally lost gravitas over the last decade. Barring a few influential few who constitute the party’s power centre, others matter only in headcount. The emergence of strong and controlling top leadership has witnessed a proliferation of para-dropped candidates with little ground-level connect with people they seek to represent. Also, leaders who enjoy good personal popularity and a robust support base in their constituencies are discarded without much qualm. If the opinion of people at large in Odisha is to be believed, the local MLA or MP is of little consequence since they lack the weight to be taken seriously by the managers of the party or government servants. They cannot get work, of whatever nature, done. This is not exceptional to Odisha though; it’s a countrywide trend.

The growing irrelevance of elected representatives doesn’t square with the blitzkrieg that has come to be part of bypolls. Electoral politics surely has transformed a great deal. We have not yet mentioned the money power at play. While every party charges the other with distributing money and rushes to the election authority with complaints, it is no secret that all parties spend a lot of to bribe voters. Such spending, going under the Election Commission radar, is a great way to funnel unaccounted-for money into productive use. Such money always played a role in our elections, but it has become more conspicuous. Perhaps much more is at play than just trying to get a candidate elected these days.

Democratic leadership is largely a myth when it comes to running a party. Strong leaders don’t tolerate rival power centres within the organisation. The latter is a potential threat to their position besides being a disruptor of the cohesive functioning of the governments they lead. Take the case of the ruling parties in West Bengal, Telangana, Odisha, Uttar Pradesh, Delhi or even the Narendra Modi-led central government, the second rung is conspicuous by its absence. It may prove to be counterproductive in the long run, but it helps the leaders to stay in control. It’s obvious that they would like to see more legislators loyal to them rather than legislators who can emerge strongly on their own. They would prefer political lightweights as candidates and spare no effort to see them elected. The entire muscle of the party, financial and organisational, thus would be at work, making elections an issue of prestige for the leader, not much for the contestant.

Indian politics has genuinely entered the era of advertising overdrive and optics. The humongous budgets parties set apart to tom-tom their achievements and made-for-television programmes tell us how. With media amplification and hyper-coverage, a victory in one place easily finds a ripple effect elsewhere. An election in Dhamnagar, thus, is not just about Dhamnagar, the government’s publicising its achievements or the Opposition highlighting its failures, reaches a population far beyond the constituency in question. No one can risk negative words about them going around. Perception management is critical to electoral democracy. No player wants to lose out on that. This has turned all elections, however small, into do-or-die battles.

Parties also have an interest in keeping their support base, both active and inactive, engaged all the time. Every election is an occasion to keep them alert to the party and its movements. A high-voltage campaign serves this purpose. The Congress support base across the country is shifting or has shifted to other parties – to AAP in Delhi and Gujarat and to Trinamool Congress in West Bengal, for example – because it is seen as unenergetic and inactive. The arrival of a new political player in Odisha can have a similar impact on it for the same reason.

Good or bad, this trend is here to stay. Politics today is a much more serious matter than it was earlier. Parties would go to any length to win the perception battle.