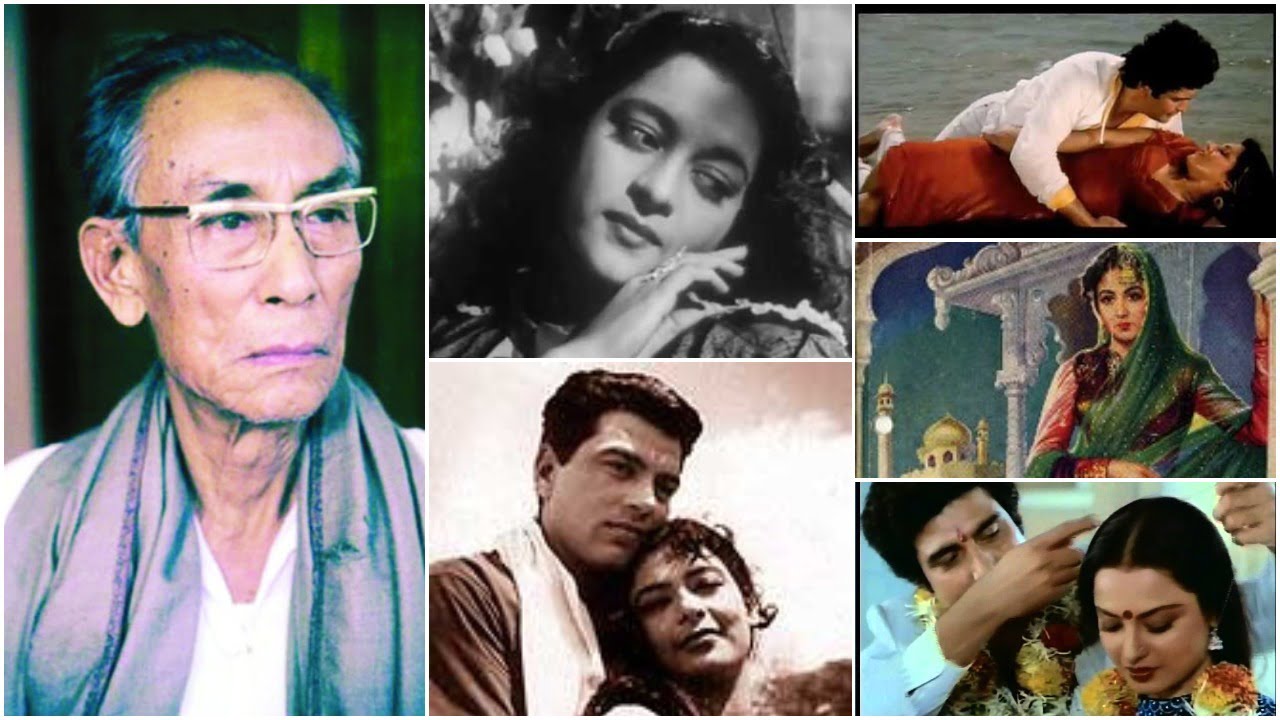 The notes of Thandi Hawayen Lehra Ke Aaye composed for the movie “Naujawan” by legendary composer S D Burman in 1951 were tweaked by various music composers to create their own version till the 90s. Picturized on Nalini Jayawant, this haunting melody was written by Sahir Ludhianvi and sung by Lata Mangeshkar. Over the years, many composers used the first few notes and made minor changes to them to compose many more mellifluous songs each of which was popular in its own right.

A year later in 1952, V. Nagaiah lifted the entire composition for the song “Konjum Puraave” sung by the inimitable carnatic vocalist M. L. Vasanthakumari (called MLV by the admirers of her voice) in the Tamil movie “Thai Ullam”.

The first of the inspired lot in Bollywood was another legendary composer, Roshan (father of Rajesh & Rakesh Roshan) who was so enamored by the music of the song that he formally requested S D Burman’s permission to recreate the tune and use it for the initial part of his composition Tera Dil Kahaan Hai which was sung by Asha Bhosle for the movie “Chandni Chowk” in 1954 with lyrics by Majrooh Sultanpuri.

Still infatuated to the tune, Roshan used it again in 1966 for the movie “Mamta”. Picturised on the beautiful Suchitra Sen and penned by Majrooh Sultanpuri, Rahe Na Rahe Hum had two versions. The more popular version was sung by Lata Mangeshkar and a relatively unheard but equally melodious duet was sung by Mohammed Rafi and Suman Kalyanpur (whose voice had an uncanny resemblance with Lata Mangeshkar).

S D Burman’s son and legendary composer R D Burman (lovingly nicknamed Pancham) rehashed the tune to create many more versions of the composition. A decade after Mamta, in 1976, Pancham composed Nagma Hamara Gayega Yeh Zamana for the Rajesh Khanna-starrer and Shammi Kapoor directed fantasy cult classic “Bundalbaaz”. This soulful composition was sung by Lata Mangeshkar and Mohammed Rafi and written by Majrooh Sulanpuri. While the film bombed at the box office initially, this song and later the movie’s release on television gave it a new-found cult following in the later years.

In 1979, S D Burman and Pancham’s music assistants and composer duo Basudev Chakraborty and Manohari Singh (composing as Basu-Manohari) were also inspired by the tune for their soulful composition Dono Ke Dil Hain sung by K J Yesudas and Lata Mangeshkar for the Amol Palekar and Mehmood-starrer “Bin Baap Ka Beta”. The movie went unnoticed and so did the song.

A few years later, in 1981, Pancham tried his luck at using the tune again for the immensely melodious “Hamein raaston ki zaroorat nahin hai” in the Hrishikesh Mukherjee directed comedy “Naram Garam” starring Amol Palekar, Shatrughan Sinha and Swaroop Sampat. Shortly after being crowned Miss India, Swaroop Sampat (Paresh Rawal’s wife) had debuted in this movie. While the movie was not a commercial success, it was critically acclaimed and later gathered appreciation after Swaroop Sampat became a household name with the hit Television series “Yeh Jo Hai Zindagi”.  The song had lyrics by Yogesh and was sung by legendary Asha Bhosle.

Disheartened with the initial response to the Naram garam track but still undeterred due to his love for the tune, Pancham reused it again in 1983 for Hame Aur Jeene Ki Chaahat with lyrics by Gulshan Bawra in the Rajesh Khanna, Raj Babbar and Rekha-starrer “Agar Tum Na Hote”. The movie was a superhit and so was it’s soundtrack. The song had three versions – a Kishore Kumar version, a Lata Mangeshkar version and a duet. All the versions were immensely popular and continue to rank high on the playlists of Kishore fans.

So enamored was Pancham with the tune that he used it again a couple of years later in 1985 in the superhit Saagar Kinare for Ramesh Sippy’s “Saagar” starring Rishi Kapoor, Kamal Hassan and Dimple Kapadia. The movie marked Dimple Kapadia’s return to movies 12 years after her debut in Bobby. The movie and it’s soundtrack were a rage and gradually gained greater popularity with the ever-increasing cult following of Pancham. This song had 2 versions – a Kishore and Lata duet and a Lata Mangeshkar solo. Such was the ingenuity of Pancham’s style and his amendments that all four versions of the tune which released in close proximity chronologically were equally admired for their uniqueness and their resemblance remained unnoticed over the years.

Shortly after Pakistani actress Zeba Bakhtiar rose to fame with “Henna”, she acted in another movie “Nargis” (1992) co-starring Naseeruddin Shah. Composed by Basu Chakraborty and with lyrics by Majrooh Sultanpuri, the song Dono Ke Dil Hain from “Bin Baap ka Beta” found its way back in this film’s soundtrack, 13 years later, but this time in the voice of Jagjit Singh and Lata Mangeshkar. This movie unfortunately got shelved and never found its way to the big screens and thus this beautiful song too passed into oblivion only to be discovered many years later by Jagjit Singh fans.

A year later in 1993, composer Raam Laxman (of “Maine Pyar Kiya” and “Hum Aapke Hain Koun” fame) too found inspiration from Thandi Hawayein and composed Kaha Tha Jo Tumne with lyrics by M G Hashmat in the movie “Pyar Ka Tarana”. While the movie went unnoticed, the soundtrack of Pyar Ka Tarana was immensely popular. This was the last of the inspirations of the original composition by S D Burman spanning over four decades.