Why Women Matter In Local Politics & Beyond 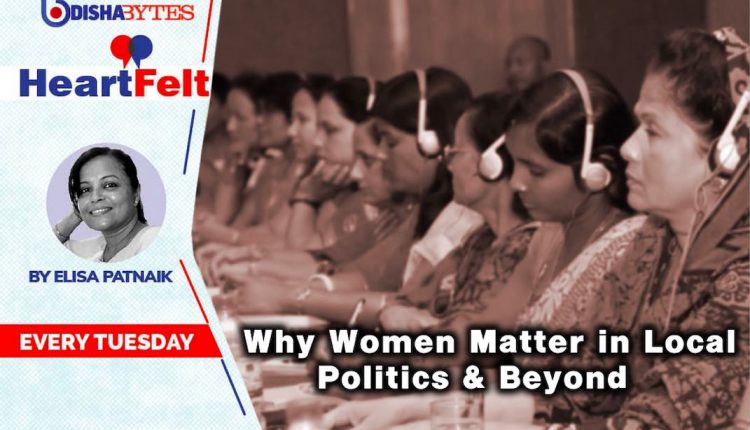 For the first time in Odisha, there were an almost equal number of women candidates contesting the recently concluded rural and urban elections in the state. Likewise, the elections also saw some equally stunning victories for women compared to the previous years, including the Mayor positions of two municipal corporations. Of course, one of the main reasons for the presence and success of more women is the implementation of 50 per cent quota for them, including reservation for certain Mayor/Chairperson positions, which necessitated political parties to field female candidates and also encouraged many independent women candidates to join the fray.

Interestingly, they contested from both reserved and unreserved seats. Overall, a total of 59 women have been elected as Mayor/Chairpersons from among the 108 ULB elections held this year.

The scenario is equally impressive in the PRI elections. Women candidates have been elected as Presidents of nearly 70 per cent of the Zilla Parishads which is more than the 50 per cent of reserved seats. Besides, women will now be heading 21 of the 30 Zilla
Parishads in the state.

The 73rd and 74th  Constitutional Amendment Acts of 1992, pioneered women’s reservation for at least 33 per cent at the local government level in rural and urban India, which led to an increasing number of women entering the local political arena and
into governance roles, that enhanced their representation and participation, which was transformational in itself.

While the Constitution has set the minimum criteria for reservation in the local bodies, a number of states have exceeded this and reserved 50 per cent of seats for women. Whereas some states have 50 per cent reservation for women in the PRIs, others like Odisha, Andhra Pradesh, Kerala, Maharashtra, Madhya Pradesh, Assam etc. have implemented it in both the PRIs and ULBs, leading to a large presence of women at the local government levels.

Interestingly, Odisha was the first state to reserve 33 per cent of the seats for women in PRIs in 1991, following the passage of the relevant Acts by the then Chief Minister Biju Patnaik. Subsequently, Chief Minister Naveen Patnaik, who has been an ardent
advocate of women empowerment, announced 50 per cent reservation for women in Panchayat bodies in 2011 and in the ULBs in 2012.

However, despite the participation of an increasing number of women in the political process, the debate over the efficacy and impact of political reservations on women’s socio-economic and political empowerment, governance and development of the
local areas are often debated.

In a country steeped in gender inequality and discrimination, is political reservation for women really an effective measure to ensure lasting and meaningful representation and participation of women? Or the large presence of women in local government bodies is only tokenism with their male relatives and other men running the show? Do women members and leaders of local self-government bodies have the capacity and agency to be political decision-makers? And importantly, do women make better political leaders?

Of course, the fact remains that women would not have become part of electoral democracy and governance without the Constitutional mandate of reservation. It continues to be one of the best ways to enhance the representation of women in
local self-governance and the decentralisation process. The large-scale representation of women at the grassroots and local level not only provides a space for nurturing women leaders but also opportunities for them to take their first steps into public and political life.

Women leaders in local governments are said to be sensitive, approachable and have a better understanding of local development issues. They seem to have the same kind of preferences and development priorities as the people they represent in their communities. Women’s representation in these local bodies has also proven to be more impactful than in bodies with unequal gender balance. Studies have also found that women’s reservation in village panchayats led to a marked change in local
government policies.

Reservation for women at the PRI levels also significantly increased their influence on policy decisions of local government. Besides, some of the critical decisions made by village and city councils could be directly attributed to the council head’s
gender.

It has also been observed that women at the local level have a tendency to invest more in critical public goods that also reflect women’s priorities, such as drinking water, sanitation, health and education. PRIs and ULBs along with the subunits (wards) are the basic units of development and these bodies are among the most effective and sustainable ways to respond to health emergencies like the recent COVID-19 pandemic and natural disasters like floods, drought etc. Women representatives and leaders have been playing a crucial role in all such situations.

Moreover, the importance given by village councils headed by women or with more representation of female members are found to be more aligned to the goods and facilities demanded or desired by the communities. Women leaders often seem to have the same kind of preferences and development priorities as the people in their communities.

Political reservation has also given opportunities to many women from vulnerable communities such as SC/ST and of other lower socio-economic status to participate in local governance, which otherwise they would not have access to. Moreover, such opportunities equip the head of the PRIs and municipal councils with skills required for further levels of political office. Findings have also shown that as these female leaders accumulate more experience, their confidence, political acumen and
governance also improve.

Overall, the increased visibility of women in the political and public spaces and offices at the local level not only portray an empowering image but also has a cascading effect and encourages other young women and girls to aspire for
positions of leadership.

Notwithstanding the merits, however, the increasing political representation and participation of women in the local government institutions doesn’t seem to be reflected in the upper levels of governance like the state legislature and parliamentary elections.

Although the reservation system has propelled women to enter into the political domain, many find it challenging to rise further due to several hindrances including deep-rooted gender discrimination, unwillingness on the part of political parties to field more women candidates and lack an enabling and safe environment.

Although reservation is an instrument of political empowerment that guarantees representation, unfortunately, it has not succeeded in becoming a platform for women to climb the political ladder and move into the state and national politics.

The current Odisha State Legislature, for example, has a mere 15 women members out of 147 MLAs from the total 30 districts in the state, comprising only 10.2 per cent of the total elected representatives.

At the national level too, the representation of women MPs in 17th Lok Sabha is only 14 per cent. The Women’s Reservation Bill, pursuing 33 per cent seat reservation for women in the lower house of Parliament is still pending approval despite being discussed for more than two decades.

By international standards, India’s female political participation lags behind major democracies including its neighbours. In 2018, the Odisha Assembly unanimously passed a resolution seeking 33 per cent reservation for women in legislative assemblies
and Parliament which was also supported by the Opposition.

Unfortunately, a politically active and assertive woman is still viewed negatively as it goes against the accepted notions of an ‘ideal’ women. Women despite overcoming significant barriers continue to battle with deeply-rooted patriarchal notions, a hostile environment and are not seen as ‘safe bets.’ In general, the perception of female candidates’ winnability remains poor.

Even after three decades, the narrative on how women leaders in local governments remain nominal post holders continues. Elected women representatives are commonly accused of being represented, led and influenced by their male relatives
such as husband, brother, father and son.

Sarpanch Pati and Mr Chairman are a few of the common labels for the proxy or stand-in representatives who also participate in meetings and make decisions on behalf of the women leaders. The tokenism is also evident in reserved seats for women, where wives of former male sarpanch/ chairpersons/wards members have stepped into the shoes of their husbands with the males continuing to influence the decisions.

Furthermore, despite the effective implementation of the reservation, gender inequalities remain in party hierarchies and committees, and women continue to be kept out of key governance posts and decision making.

Some critics are of the view that political reservations have brought into office women leaders who are relatively inexperienced, have less political ambition and fewer political prospects. Among the other key gaps identified in women leaders from
the local government structures are:- Lack of knowledge on local governance Acts and rules, education, experience in political administration, gender bias, restrictions around their mobility and non-conducive work environments.

Extending 33 per cent reservation of total seats for women candidates to Assembly and Parliamentary elections is definitely the next progressive step. Promoting a safe, conducive favourable work environment for women, so that they are able to perform
to the best of their ability, along with their mentoring, are other critical steps. In addition, formal structures like special committees need to include more women members in decision making.

It is also important to note that though political reservation tries to address institutional barriers by increasing access to opportunities for women, recognising and addressing gender barriers and building an enabling environment, are critical to
create meaningful transformation

Minor Irrigation Division Engineer Under Vigilance Lens, Raids On At 3 Places In Bhubaneswar