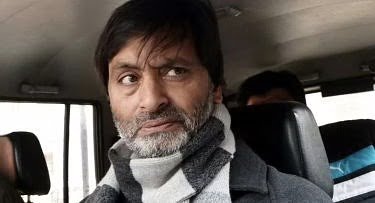 New Delhi: A special NIA court on Thursday convicted Kashmiri separatist leader Yasin Malik after he pleaded guilty in a case related to terrorism and secessionist activities in the Kashmir valley.

On the last date of the hearing, Yasin Malik told the court that he was not contesting the charges levelled against him, including sections 16 (terrorist act), 17 (raising funds for the terrorist act), 18 (conspiracy to commit terrorist act), and 20 (being member of a terrorist gang or organisation) of the UAPA and sections 120-B (criminal conspiracy) and 124-A (sedition) of the Indian Penal Code. “The above analysis reflects that the statements of witnesses and documentary evidence have connected almost all the accused with each other and to a common object of secession, to the commonality of means they were to use, their close association to terrorist/terrorist organisations under the guiding hand and funding of Pakistani establishment,”  NIA special Judge Praveen Singh noted.

The court also sought an affidavit from Malik regarding his financial assessment and asked NIA to submit the same, TOI reported.

Arguments on sentencing will be held on May 25.

In A First, Devotees To Be Allowed Atop Bathing Altar On Lord Jagannath’s Snana Yatra In Puri