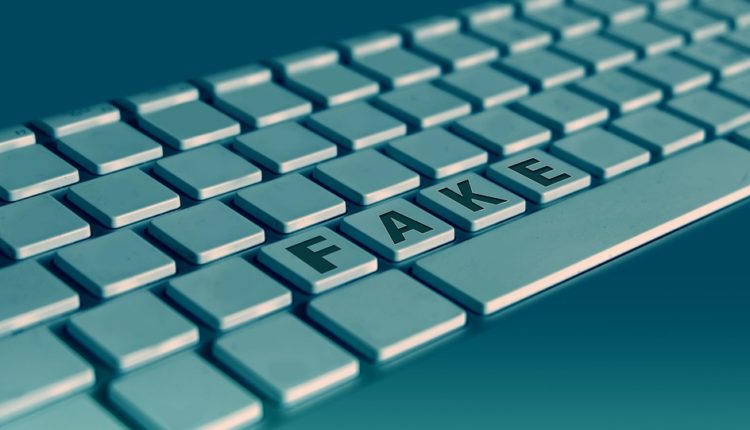 Bhubaneswar: The year 2020 saw the Governor, Odisha government and ministers falling prey to fake news on social media. Two MPs also drew brickbats for their wrong tweets. Condolences too had poured in for veteran Odia actor Bijay Mohanty two weeks before his death. And was that deer shot leaping happily through the waves at Chandrabhaga beach? Let’s do some fact check.

In October, the CMO tweeted a dubious report lauding measures to contain COVID-19 in Ganjam district.

The report, citing a study by UK’s Oxford University and the Northeastern University of the United States, was first published by a little-known website pledgetimes.com on October 8. While the news item claimed that the study praised the Ganjam and Dharavi models of dealing with the pandemic, there was no mention of them in ‘Crowding and the shape of Covid-19 epidemics’ published in the highly-respected journal “Nature Medicine” on October 5. The central hypothesis of this study by the Oxford University and the Northeastern University was how an unaffected area can see a rapid peak in cases when individuals have high rates of contact within social units, such as households, care homes and prisons.

Only 310 urban centres from the European Commission Global Human Settlement Urban Centre Database, besides five most populous cities in each country including Delhi, Kolkata, Mumbai and Chennai, were selected for the study.

When people started questioning the authenticity of the claim, the CMO’s Twitter handle deleted one post which referred to the “praise” by Oxford University.

In August, Governor Ganeshi Lal and Union Ministers Dharmendra Pradhan and Pratap Sarangi took to Twitter to congratulate IAF Wing Commander Nikhil Rath after learning from social media that he had been selected for the country’s first manned space mission, Gaganyaan.

The Governor said he was extremely delighted to know that Rath had been shortlisted for the ambitious first human mission to space of ISRO.

Elated to learn that Wg. Cdr. Nikhil Rath of @IAF_MCC has been shortlisted to be a part of the 4 member crew of India’s first manned space mission, Gaganyaan 2022.

It is a matter of immense pride that this son of Odisha will be a part of this significant & prestigious mission. https://t.co/2CmGjlRZQP

Happy to know that @IAF_MCC Wing Commander Nikhil Rath of Balangir, Odisha has been shortlisted to be part of the human mission to space in the prestigious #Gaganayan project of @isro .
Heartiest congratulations to the ace pilot from the State for getting this opportunity.

Though Rath was among the 25 pilots shortlisted in 2019 for Gaganyaan, he never made it to the final four candidates, who were in Russia undergoing training for the mission.

A senior IPS officer had also congratulated him without verifying the information.

In October, Law Minister Pratap Jena tweeted his condolences on the death of former Cuttack MLA Samir Dey, which turned out to be a hoax. 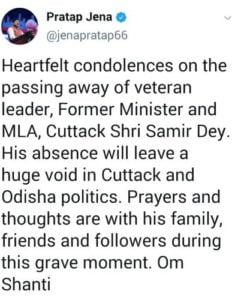 President of Cuttack Nagar BJP unit, Lalatendu Badu, later clarified that the health condition of Dey is stable and he is undergoing treatment at a private hospital.

Similarly, Kendrapada MP Anubhav Mohanty was heavily trolled for mourning the death of senior BJD leader and Pipili MLA Pradeep Maharathy hours before he was declared dead on October 4. Anubhav tweeted his condolences at 11.36 pm, while Maharathy breathed his last at SUM Ultimate Medicare hospital in Bhubaneswar around 2.36 am.

This is what he had to say in his defence:

Mistakes happen but such mistake shouldn’t have happened. I feel sad for my post which fortunately isn’t true. Now I found that I received that news intentionally from people connected to a “businessman” who is a professional seller of #FakeNews just to prove me wrong before all.

The Odisha film fraternity was also troubled when numerous reports appeared on the internet late on July 6, claiming that veteran actor Bijay Mohanty had passed away. Film personalities requested netizens to be responsible while sharing such sensitive news and delete the fake news shared on social media.

The veteran actor breathed his last on July 20.

On April 3, a video clip of a deer running and leaping through the waves during the nationwide lockdown was shared by a Twitter user.

The accompanying caption read: “Chandrabhaga, Puri-Konark marine drive. See how freely these beautiful creatures of nature are enjoying the human lock-in period. Don’t you think it’s time to introspect? We r only an instrument, not having any power of ourselves in the hand of Almighty Every1 has their share of life.”

Chandrabhaga,Puri-Konark marine drive
See how freely these beautiful creatures of nature are enjoying the human lock in period.Dont you think its time to introspect? We r only an instrument, not having any power of ourselves in the hand of Almighty Every1 has their share of life. pic.twitter.com/6BzFJNZQYr

Several others too shared the same video with similar captions.

However, a search on the internet revealed that this video clip was captured by a French filmmaker Anthony Martin during the shooting of a wildlife film in the south-west of France in 2015. The French filmmaker had posted the video on Facebook.

Anyone For Vegan Burger That ‘Bleeds’!

Possibility Of Severe Cyclonic Storm, Says IMD; But Clearer Picture After It Develops…