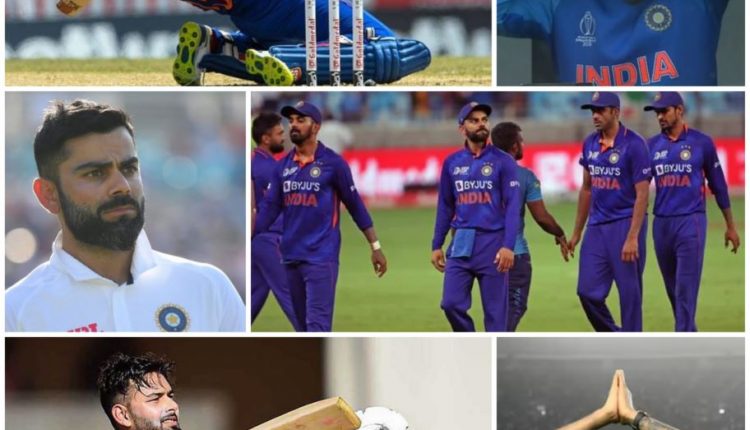 As we prepare to welcome 2023, it’s time to check out Team India’s balance sheet in the year that will soon be behind us.

It’s been a bitter-sweet year in all three formats, the disappointing lows overshadowing the rare highs.

As Suryakumar Yadav – SKY to the cricketing world — continued to redefine T20 batting, pulling off shots which none can even dream of, the Indian team faltered in overseas Tests, tripped in the T20 Asia Cup and World Cup despite being among the favourites and came out second-best in ODI series in South Africa and Bangladesh.

The year started on a dismal note as India flattered to deceive in South Africa.

After raising visions of a first-ever Test series triumph in Protea-land by convincingly winning the Boxing Day Test match at Centurion, the touring team suffered a meltdown which saw them surrendering the Test series (1-2) as well as the ODI series (0-3).

The Test debacle was particularly disappointing because India’s potent pace attack, spearheaded by Mohammad Shami and Jasprit Bumrah, was rendered toothless in the final innings of both the second and third matches, at Johannesburg and Cape Town, respectively.

There was to be no redemption in the ODI series that followed, as the spirited Proteas blanked India 3-0.

The end of the year could have been even more painful, had Shreyas Iyer not displayed his calm and classy demeanour, and Ravichandran Ashwin not made Bangladesh pay for a dropped chance in the second Test at Mirpur.

With Bangladesh sniffing their maiden Test victory against India, Iyer and Ashwin found their mojo to haul the team out from an embarrassing 74/7 and carried them to the modest target of 145.

The disappointing series loss against a beatable South African side prompted Virat Kohli to quit the Test captaincy. He had already relinquished the T20 International leadership role after last year’s World Cup in the UAE and was subsequently replaced by Rohit Sharma as ODI skipper in December 2021 – a decision which didn’t go down well with Kohli.

With 40 Test wins in the 58 matches that he led in, Kohli is India’s most successful captain in the longest format of the game. But a global ICC title eluded Kohli – be it T20 World Cup, ODI World Cup, Champions Trophy or World Test Championship.

His lack of runs in all three formats over a prolonged period of time didn’t help Kohli’s cause, and cricket pundits had started wondering whether it was time to hand over the team’s reins to Rohit Sharma.

Not only was he the seniormost member, his consistency with the bat at the top of the order and success as Mumbai Indians captain in IPL made Rohit the most deserving candidate to step into Kohli’s shoes.

As luck would have it, the India captaincy coincided with a dip in form and fitness, which conspired to make 2022 one of Rohit’s most forgettable years.

The stylish right-hander struggled with the bat, managing 995 runs in 39 appearances for Team India. It was only the second time in 11 years that Rohit had failed to breach the 1000-run mark and also the first time since 2012 that an international century had eluded the ‘Hitman’. In his worst-ever IPL season, Rohit averaged a lowly 19.14 — without a single half-century in 14 matches.

Rohit was pulled down by health and fitness issues as well. Ruled out of the ODI series in South Africa at the start of the year due to a hamstring injury, Rohit missed the one-off rescheduled Test in England after contracting COVID-19. And in Bangladesh recently, Rohit hurt his thumb in the second ODI to be rendered hors de combat for the rest of the tour, including two Test matches.

The biggest success story of Indian cricket in 2022 was undoubtedly the phenomenal Surya.

Having made his senior international debut at the age of 30, the 32-year-old Mumbaikar seems to be in a hurry to make up for lost time. And how!

Someone as accomplished as Kohli admitted that he was simply “blown away” watching SKY bat from the non-striker’s end during one of his magical knocks in a T20I.

The audacity and fearlessness with which he attacks the opposition, as well as his ability to hit boundaries at will make him one of a kind. Images of SKY scooping the ball over fine-leg from outside off stump or almost squatting to upper-cut the ball over the wicketkeeper, or going inside-out and airborne to send the ball over extra cover boundary dominated the cricket world in 2022.

SKY became only the second batsman to aggregate over 1,000 runs in a calendar year. His 1,164 runs came at a mind-boggling strike rate of 187.43 and an average of 46.56. In 31 innings, SKY pummelled a staggering 106 boundaries and 68 sixes, underlining why he is such a fearsome batsman for bowlers.

Though his ODI figures are not as impressive, Surya still struck at a decent strike rate of 92.52 in the 50-over format. His new year wish will surely be to get a chance to make his Test debut.

Rishabh Pant was India’s standout performer in Tests. He played all 7 Test matches this year and tallied 680 runs at an average of 61.6, striking at an impressive 90.9.

The left-handed batted in his typical aggressive style to notch up 2 overseas hundreds. Both efforts (146 vs England at Birmingham and 100* vs South Africa at Cape Town), unfortunately, weren’t enough to ensure victory.

Intriguingly, the wicketkeeper-batsman failed to reproduce his Test form in the white-ball cricket, especially in T20Is. An aggregate of 364 runs in 25 T20Is at an average of 21.41 and strike rate of 132.84 didn’t do justice to Pant’s potential.

The year also brought back Hardik Pandya in a new avatar. The fitter and more mature cricketer led by example to stitch together a fairytale IPL triumph for debutants Gujarat Titans.

Not only did the allrounder lead the Titans astutely, he top-scored for the team and also produced important breakthroughs with some sharp spells.

Pandya’s new-found confidence reflected in T20 Internationals, but Team India will be hoping that he can be an effective tool in ODIs and Tests as well.

The IPL has helped India unearth an abundance of talent over the last few years. If that is a luxury for Indian selectors, they also have the responsibility to back young players who have proven themselves at the international stage but often have to make way for seniors who come back from injuries or a break.

Two cases in point are Shreyas Iyer and Ishan Kishan. While Iyer’s consistent performances helped India beat Bangladesh in the hard-fought second Test at Mirpur recently, Kishan grabbed his only chance in the final ODI by smashing a double hundred to hand India a resounding consolation win after Bangladesh had sealed the series.

Indian cricket will be better served if the likes of Iyer and Kishan are made regular members of the playing XI. If that means dropping out-of-form veterans, so be it. It’s time the selectors took some bold calls.