Bhubaneswar: While Odisha is likely to experience dense fog for another two days, the India Meteorological Department (IMD) on Saturday also forecast light rain at some places in the state from January 17.

According to the midday bulletin, Sundargarh, Keonjhar, Mayurbhanj, Balasore, Bhadrak, Jajpur, Kendrapada, Cuttack, and Dhenkanal may experience light rain on January 17. Light rain is also likely at one or two places in Keonjhar, Mayurbhanj, Balasore, Bhadrak, Dhenkanal and Jajpur the following day and there will be little change in the weather thereafter.

There will be no large change in the night temperature across Odisha during the next 4-5 days, it added.

After a few days of biting cold, the state has been witnessing a rise in temperature with a gradual weakening of northerly and north-westerly wind flow. Koraput was the coldest at 7.5 degree Celsius in the last 24 hours followed by G Udayagiri in Kandhamal at 7.6 degree Celsius, and Daringbadi also in Kandhamal and Semiliguda in Koraput at 8.7 degree Celsius each.

The mercury hovered around 17 degree Celsius in the twin cities of Bhubaneswar and Cuttack. 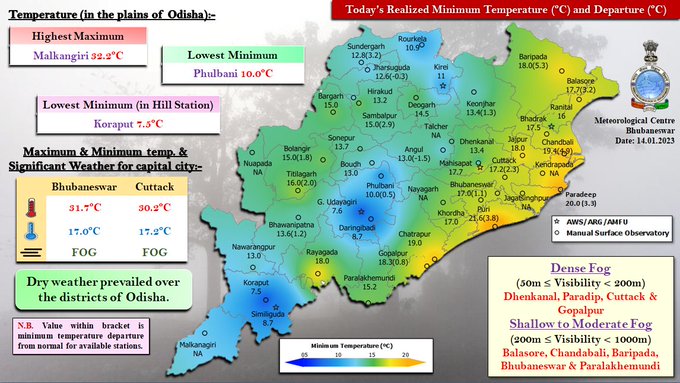