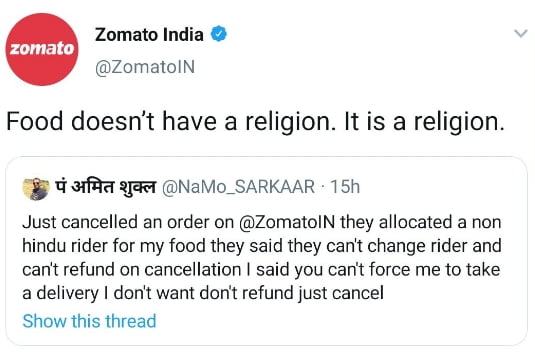 Zomato on Wednesday won the Internet by refusing to change a Muslim delivery executive for a customer’s order. The food delivery responded by saying “Food doesn’t have a religion. It is a religion.”

A resident of Jabalpur, Madhya Pradesh tweeted to Zomato asking them to cancel the order and refund his money because the delivery rider was a “non-Hindu”.

“Just cancelled an order on @ZomatoIN they allocated a non Hindu rider for my food they said they can’t change rider and can’t refund on cancellation I said you can’t force me to take a delivery I don’t want don’t refund just cancel,” Amit Shukla, a resident of Jabalpur in Madhya Pradesh, tweeted.

Shukla shared screenshots of his conversation with Zomato’s customer care threatening to take it to court.

Zomato, however, stood its ground and refused to change the delivery person. Even founder Deepinder Goyal stepped in and firmly stated, “We are proud of the idea of India – and the diversity of our esteemed customers and partners. We aren’t sorry to lose any business that comes in the way of our values.”

Former Jammu and Kashmir Chief Minister Omar Abdullah tweeted “Respect. I love your app. Thank you for giving me a reason to admire the company behind it.”

“Salute Deepinder Goyal! You are the real face of India! Proud of you,” former Election Commissioner S.Y. Quraishi tweeted.

Shukla was also informed by the customer care executive that there will be no refund for cancelling the order.

But all is not well on Twitter. There has been a backlash to boycott Zomato accusing the company of double standards.

Were These Bollywood Stars On A High?