13 Years On, Digapahandi Bus Stand In Odisha’s Ganjam Yet To Get Over 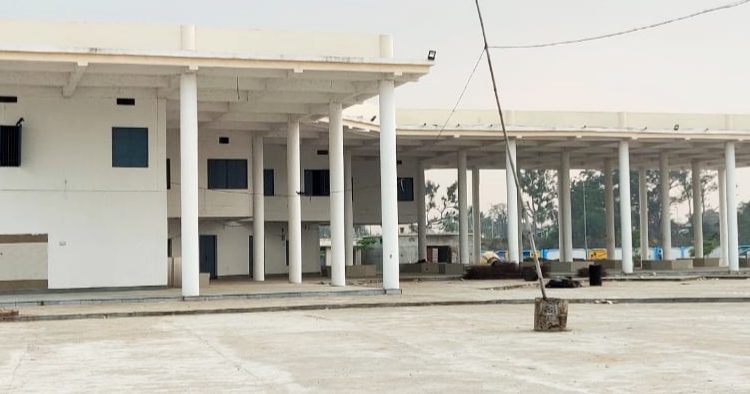 Berhampur: Construction of Digapahandi bus stand has been continuing for the last 13 years. Yes, you read it right. Paucity of funds has been cited as the reason for the delay.

With work still moving at a snail’s pace, members of Digapahandi Bikash Parishad led by its president Asesh Nath Mishra have started a one week satyagraha near the Mahatma Gandhi statue to press for their demands.

They also submitted a memorandum, addressed to the Chief Minister Naveen Patnaik, to Digapahandi Tehsildar Aditya Kumar Swain. The Parishad, which has been spearheading  a movement for development of Digapahandi, demanded that the bus stand be completed at the earliest.

Mishra also demanded a masterplan for the systematic development process, renovation and repair of the burial ground, roads, drains, opening of a Government ITI at Digapahandi. Their other demands include an overhead tank for 24-hour water supply, construction of modern park and recreation centres, recognition of Community Health Centre as the sub-divisional hospital, construction of a new vending zone, renovation of Kabisurya Town Hall, opening a new court of Sub Judge.

The area which came into form about 215 years ago and got the status of a notified area council (NAC) in 1971 is still wallowing in neglect.

Digapahandi was established by Raja Chaitanya Dev (1806-1830) during 1806 after the British rulers forced the king to shift kingdom from Vijaya Nagar Gada (presently submerged under Ghodahada dam) to Digapahandi to facilitate their military strategy, said Dr Anantaram Kar Kaundinya, renowned researcher of Ganjam.

Since then the buses stops were on the road side and the practice is still on.

High Court Sends Notice To Virat Kohli & 2 Others; Know Why