32 Gharial Hatchlings Swept Away In Floodwaters From Odisha’s Satkosia! 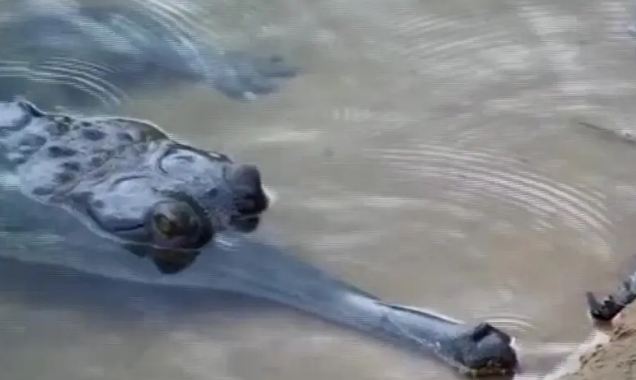 Bhubaneswar: Thirty-two gharial crocodile hatchlings are feared to have been swept away from Satkosia gorge in the floodwaters of the Mahanadi in Odisha’s Angul district.

While wildlife experts and environmentalists are worried about the safety of the baby gharials, regarded as an endangered freshwater crocodile species, forest officials said a search operation would be carried out to rescue the hatchlings once the floodwaters recede.

These crocodile hatchlings were sighted in the gorge in May this year. These were born from the eggshells of the same mother at the same nesting site through natural breeding on May 11.

While some locals were of the view that the authorities could have taken the hatchlings to an enclosure before the flood to save them, Divisional Forest Officer (DFO), Satkosia, Saroj Panda, said that the purpose of the Gharial Recovery Project is to make the reptiles acquainted with nature, whereby they can survive. There is little intervention from the authorities, he said.

Satkosia gorge, located on the Mahanadi river near Tikarpada in the district, is known as a natural habitat for gharial crocodiles and these often get swept away by river currents, mainly by floods in the rainy season, making their conservation all the more challenging.

“A search operation would be launched as soon as the flood situation improves and the water recedes. After their rescue, the hatchlings would be released into their natural habitat,” The DFO added.

A total of 28 gharial hatchlings were reportedly swept away in the floodwaters last year.