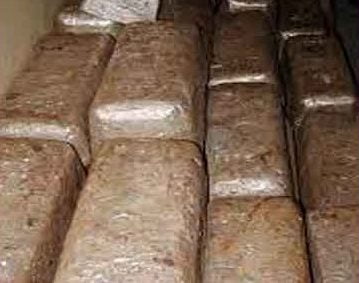 Puri: The century-old Emar Mutt in Puri town hogged the headlines for the second consecutive day on Saturday with the recovery of more silver ingots.

According to sources, the Trust Board appointed by the Endowment Commissioner on Friday took possession of the Mutt replacing Mahant Rajgopal Ramanuja Das.

The Trust Board members accompanied by executive magistrate Pralayanand Satpathy, Endowment Inspector Basant Kumar Jena, IIC of Simhadwar police station Geli Kumari Sahu and a team of policemen, however, were stopped by the supporters of the Mahant at the entrance to the mutt.

After they were dispersed by police, the Trust Board members entered the mutt and recovered 16 iron swords from the gadi ghara (the sanctum sanctorum of the temple). The members later recovered three silver vase, a silver filigree flower, a bronze idol of a cow and a calf and some silver utensils from the Jhulana Mandap room. Later, the inventory of all items was done in presence of the executive magistrate.

The Trust Board members on Saturday went to the mutt again and recovered 47 silver ingots from room number-4.

Notably, Rajgopal and some disciples of the mutt were arrested in March 2011 in a silver ingot theft case from the mutt. During the investigation, police recovered 522 numbers of silver ingots weighing 18 tonnes worth over a hundred crore.

Following the arrest of the Mahant, the State Endowment Department appointed an ad-hoc Trust body for the daily rituals of the deities in the mutt.

After his release on bail, Rajgopal did not cooperate with the Trust. As a result, the Endowment Commissioner removed him and entrusted the charge of the mutt to a newly-formed trust body with the Mahant of the Uttaraparshwa Mutt Narayan Ramanuj Das, propagator of Shree Jagannath Culture Naresh Chandra Das, social activist Pratima Mishra, senior lawyer Bana Bihari Nayak and the City DSP as the members.

The state government began the demolition of the Emar Mutt on August 29, 2019 for the safety and security of the Jagannath temple as per the recommendations of the BP Das Commission.