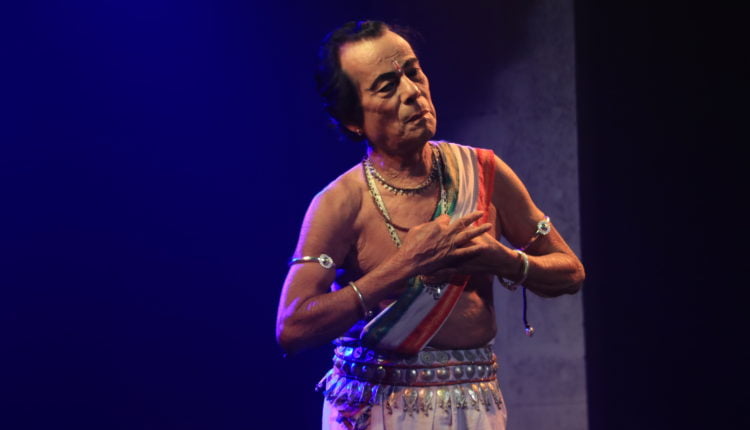 Guru Sudhakar Sahoo is 86 and still dances on stage. The oldest Odissi performer in the world today, he also regularly travels across Odisha and even far off cities like Ahmedabad and New Delhi to teach dance.

Sahoo was the late celebrity-danseuse Indrani Rehman’s vocalist and percussionist on many occasions. He was also the first guru of internationally-acclaimed Odissi dancer, Sujata Mohapatra.

After meeting him in Odisha, famed Malayasian dancer-choreographer Ramli Ibrahim had remarked, “He is my greatest discovery so far in the Guru Debaprasad Das Odissi tradition.”

The late renowned scholar, Dhirendra Nath Patnaik, has also acknowledged Sahoo’s contribution in his book on Odissi, which is considered the Bible of this dance form.

The senior-most disciple and close associate of late Guru Debaprasad Das, one of the founding fathers of Odissi dance, Sahoo has created a distinct identity as the undisputed master of ‘abhinaya’ besides crafting some brilliant choreographic works. 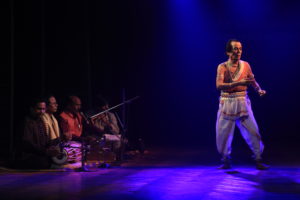 Excerpts from an interview with OdishaBytes:

Despite your decades of service to Odissi and multiple achievements, you remained less visible in Odissi circles.

I lived my entire life away from Cuttack and Bhubaneswar. At present, I am living in my village in Dhenkanal district. So I did not get the publicity and attention that my counterparts received by being based in the cities.

Why didn’t settle in a city?

I was with my teacher, Guru Debaprasad Das, from 1954 till his death in 1985. I was his disciple and also his constant companion. I stayed with him in Cuttack and Puri. After he joined Utkal Sangeet Mahavidyalaya in Bhubaneswar, he could not teach anyone outside the state capital. So he sent me to different towns across Odisha to train students. I spent my entire career as a touring teacher to various dance schools and hence could not develop a base in Cuttack or Bhubaneswar where my contemporaries prospered and became popular. 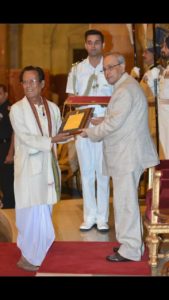 Do you repent this decision to be a touring-teacher?

Not at all. It was important for me to carry forward the legacy of my guru who was a visionary. Besides, I didn’t harbor any unusual ambitions in life. I loved Odissi dance and my guru and I thoroughly enjoyed my intimate journey with both.

How did you get into dance?

I imbibed my love for dance, music, literature and theatre through my father who was very knowledgeable about these subjects. He had an amazing ability to sing traditional Odia songs and explain the songs to the people in our village. This developed in me a deep sense of love for literature, mythology in particular, and music. I learnt music from my father as a kid and this helped me to join the touring theatre troupe of my village known as jatra party.

Later on, I developed a keen interest in dance when I worked at the famous Annapurna Theatre in Cuttack. My association with the three stalwarts of Odissi — Pankaj Bhai, Kelu Bhai and Deba Bhai — motivated me to focus on Odissi as a full time dance teacher.

Are you happy with the Odissi scene of today?

Odissi dance has gone global and it makes me so happy. But, what worry me are the half-baked gurus and impatient dancers who are in a hurry to go on stage.

Many of the dancers have got talent. But most of them have little patience to prepare themselves for the stage. Dance is not a mere drill that one could just learn and imitate on stage. It has to come from within with feeling and understanding of the movements, characters and sequences of the choreography. Dance has a language of its own. So, the dancer must have a proper understanding of that language to do justice.

I would rather blame the gurus for grooming poor dancers. They should not encourage immature students to go for stage performances. The students must follow the set pattern of the syllabus without any shortcut methods.

One must have adequate knowledge of literature and music besides mastery over the dance form to qualify as a guru. A guru is not a mere dance trainer.

It is very important for a teacher or a dancer to learn from life besides from the texts. Imitating any action or expression does not help. One has to develop one’s own perception and imagination to develop an individual signature as an artiste. 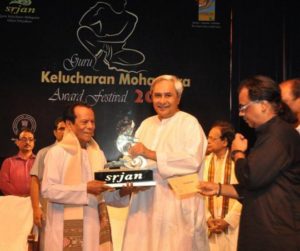 During the past six decades of your career as a dance teacher, you have trained a large number of Odissi dancers. But we hardly come across someone today who is known exclusively as your disciple or one who has made a mark in the field.

It pains me a lot that though I groomed hundreds of promising dancers across our state starting with Bijaylaxmi Mohanty, who was a star dancer like Sanjukta Panigrahi during her time, very few could continue with dancing. Unfortunately, the conservative social system in those days ruined the career prospects of many gifted Odissi dancers in Odisha.

I used to teach dance in small towns in Odisha like Baripada, Puri, Balasore, Sambalpur, Bhadrak and Chhatrapur. These towns did not have the scope for these students of Odissi to prove their talent while dancers based in Bhubaneswar and Cuttack could avail the opportunities. Three of my disciples from undivided Balasore district had won National Youth Awards for Odissi dance. This proves that there are talents beyond the capital city, but the scope is still missing for them.

How do you keep fit at this age to be able to dance and teach it too as a regular travelling guru across towns and cities?

I maintain a disciplined lifestyle. I go for regular walks, exercise and Yoga. I live in a village where life is simple, pure and natural unlike in the cities. The simple life does not cause any financial or emotional stress on me. I live a contented life. And that keeps me fit.

No Decision Yet On Reopening Schools In Odisha: Minister; Check Details