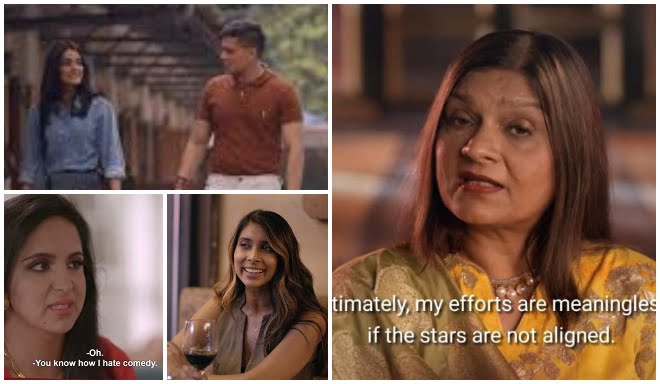 Made in Heaven is a fictional show, which depicts the pitfalls and shenanigans of Indian weddings, on Amazon Prime. I felt it got sidetracked into too much wokeness and ultimately did not explore a lot of what it intended to do. Indian Matchmaking, a documentary-cum-reality show on Netflix, on its part, stays true to its objectives throughout the episodes, the objective being to present word for word and frame for frame how Indians or Indian-origin people go about the process of arranging a marriage.

The series is created and co-produced by Smriti Mundhra, an Indian-American filmmaker, and I guess it is largely targeted towards the American and the affluent Indian audience rather than the Indian heartland. It focuses on Sima Taparia, a Mumbai-based matchmaker, and her clients in India and the US as they try various permutations to find the right future spouse. Even though most of Sima’s clients are rich upper caste Indians or Indian-Americans, the modus operandi of matchmaking, starting from the biodatas to the dates, is pretty relatable to everyone.

First thing we should remember that Sima Taparia is sort of the protagonist of the show but she is not the creator of the show. Even though we are made to watch from her point of view, the show does not endorse or justify her actions at any point. Documentaries can be made with the bias of the director or they can just present the information as it is without any judgements. Indian Matchmaking belongs to the latter. Its method is fly-on-the-wall and it stays away from influencing the viewer as much as possible. Hence a lot of the criticisms about the show being regressive are perhaps misconstrued. The people, including Sima, in the show exhibit regressive and outdated mindsets but the show itself, like any reality show, captures those sentiments on camera for the purpose of entertainment. I would actually categorise it under comedy or to be precise cringe-comedy because so many moments with the characters are distressingly funny.

For example, Sima visits and makes her clients visit astrologers, face-readers, life-coaches who amazingly give accurate predictions. She herself seems to be superstitious in belief and atavistic in approach. Her advice to her clients, with exhortations of “adjust, compromise, be flexible”, comes from an old Indian way of thinking that marriages demand a lot of sacrifice which to be honest is not totally incorrect. The clients make up the other main characters of the show, some of whom seem likeable while others are downright disagreeable. Again this is a reality show made for the purpose of entertainment and I thought it was really smart to have such a wide range of participants. The objective of the show has never been to put forward a scholarly analysis of India’s deeply entrenched patriarchy and casteism and colourism. The show never claims to do that and only produces what it saw and I am okay with that because even though we may find some of the views of the characters unpleasant, it really is a microcosm of most Indian families. There is an element of dark-comedy and trashiness to the entire format, which is what every reality show strives to do. If the show had romanticised the ideas of the people in it then most of the criticisms would make perfect sense.

What the show does romanticise, however, although in a very subtle way, is the concept of arranged marriage itself. This is demonstrated by the small snippets of various couples reminiscing about their first meetings at the beginning of every episode. This is likely lifted from the movie When Harry Met Sally except for the fact that the couples in that movie did not meet through arranged marriages. Having said that, I wouldn’t make any judgements about anyone on the show because clever editing takes away a lot of context and at the end of the day, the producers need to keep the characters and their stories exciting. If you watch it with the purpose of having laid-back fun, you will enjoy Indian Matchmaking.

Also Read: Who Ended Up With Whom On Indian Matchmaking & Here’s How Much Sima Aunty Charges

Also Read: Of ‘Sima Aunties’ & ‘Indian Matchmaking’ – Tweets About The Netflix Show You Will Connect To