‘Aadhaar Linkage To Pension To Deprive 11 Lakh Beneficiaries In Odisha’ 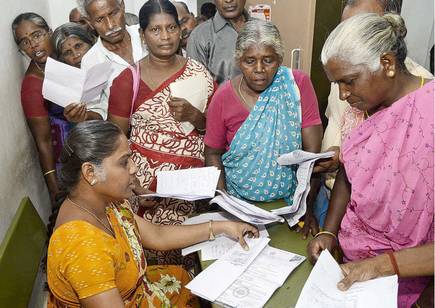 Bhubaneswar: The state government’s decision to link payment of pension under NSAP and MBPY to Aadhaar cards will deprive more than 11 lakh beneficiaries of the benefits at the time of COVID-19.

The National Social Assistance Programme (NSAP) and Madhu Babu Pension Yojana (MBPY) are social safety nets covering some of the most vulnerable citizens living in poverty: the elderly, persons with disabilities, widows, and transgender persons. Around 49 lakh beneficiaries under these programmes are paid a paltry pension of Rs. 500-700 a month.

In July 2020, in light of the pandemic, the state government announced a “one time” payment of Rs. 1000. In July and August, the Social Security & Empowerment of Persons with Disabilities department issued circulars specifying that the pensions and “ex gratia” amount would be disbursed in cash only to those who have Aadhaar cards and accounts having “Aadhaar verified”.

The mandatory Aadhaar linkage and verification threatens to deprive over 11 lakh beneficiaries of the much needed pension under the schemes, said convener of Right to Food Campaign, Odisha Sameet Panda.

The Government of Odisha had originally opposed the Aadhaar linking with Pensioner’s account in 2017 on the grounds that it would cause hardship to the beneficiaries. But, in January 2020, it went back on this, and announced that pension accounts would have to be linked to Aadhaar for “verification” and seeding.

As per the updated National Dashboard (Annexure) of National Social Assistance Programme, only 83% of the NSAP accounts in Odisha have been “verified” by Aadhaar, while only 74% have been verified for the MBPY scheme. This means that more than 11 lakh persons could lose their benefits because of a lack of “Aadhaar verification”, Panda said.

“Besides, the Aadhaar seeding and verification processes are shrouded in opacity. The processes can fail for a range of reasons while the Aadhaar-enabled Payments System (AePS) has its own share of failures,” Panda said.

He further said it is almost impossible for those who are not mobile, have limited access to transportation, or live in an area far from administrative headquarters to get their Aadhaar cards verified, particularly at the time of lockouts and the pandemic.

“In any case, the purpose of verifying beneficiaries is not served by Aadhaar verification or linkage. The Aadhaar database was created on the basis of self-verified documents, and the Aadhaar “card” is just a printout, which was not intended to serve as a proof of identity,” the convener said.

Citing the case of starvation death of Dukhi Jani, a 46-year-old tribal widow who had been struck off the pension and food ration lists, due to non-seeding of Aadhaar with her ration card, Panda termed the government decision as callous move which can have fatal implications.

He demanded roll-back of the order by the Government in the interest of the vulnerable sections of the society.