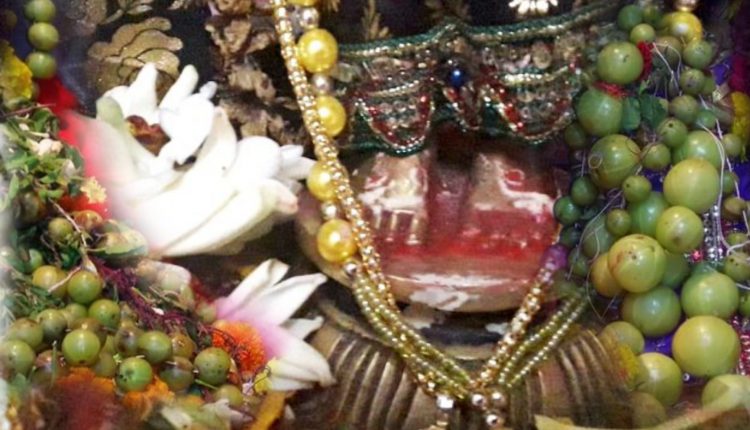 Puri: Amla Navami, also known as Akshaya Navami, is being celebrated with religious fervour at the famous Sakhigopal temple in Odisha’s Puri on Wednesday. It marks the ninth day of ‘Shukla Paksha’ in the Kartika month according to the Hindu calendar.

On the auspicious occasion, Goddess Radha is adorned in a special attire called Odiani Besha while Lord Krishna is dressed in Natabar Besha. She wears a typical Kachha costume and the ritual is known as Radha Pada Darshan.

However, devotees will not be allowed to touch the Radha Pada this year, informed Puri SP Kanwar Vishal Singh.

According to sources, the district administration has made elaborate arrangements for Radha Pada Darshan. Barricades have been put up for devotees to maintain queues, while special emphasis has been laid on the provision of drinking water and parking facilities.

“A complete devotee-oriented arrangement is in place. We will be deploying 20 platoons of policemen for their convenience and smooth darshan. Two Additional SPs will be camping here round-the-clock and 50 more police officers stationed. Separate arrangements have been made both inside and outside the temple,” Puri SP told the media.

Notably, devotees were barred from having ‘Radha Pada Darshan’ for the last two years due to the COVID pandemic. The administration had enforced Section 144 of the CrPC in and around the centuries-old shrine. Hence, devotees in large numbers are expected to throng the temple this year.

This apart, separate arrangements have been made for the Mela ground, traffic management, and ambulance for any emergency.

People worship Amla (Indian gooseberry) tree and Goddess Lakshmi to seek blessings on this day. The occasion is celebrated nine days after Diwali. It is considered to be one of the most important rituals in the Hindu religion.