Basquiat Painting Sells For $41.8 Million At Christie’s Auction; Most Expensive Western Work Of Art Ever Sold In Asia 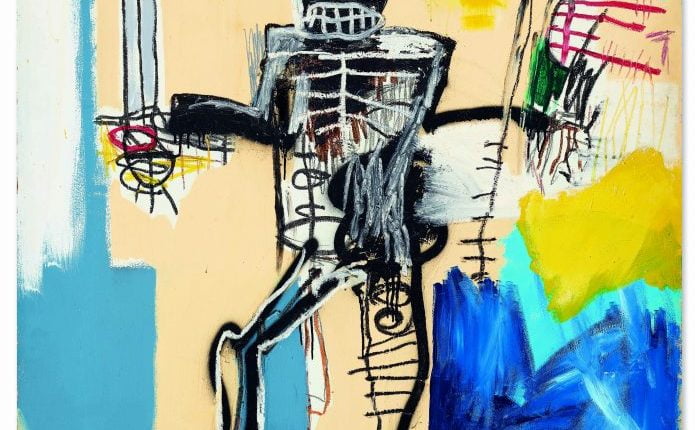 Creating a record of sorts, the international auction house Christie’s sold well-known painter, Jean Michel Basquiat’s ‘Warrior’ at  US$ 41.8 million this week. It is considered to be the most expensive Western artwork ever sold in Asia in Hong Kong (HK$323,600,000).

The total combined sale on March 23 for Christie’s 20th Century Evening auction was more than $ 274,000,000 as collectors bid in London as well as live-streamed from salerooms in Hong Kong and New York with more than 400,000 people tuning in through various digital platforms.

Works of black artist Jean Michel Basquiat who died at the young age of 27 in 1988 due to heroin overdose have been lapped up by celebrities like David Bowe, John McEnroe, Madonna, Leonardo DiCaprio, and Johnny Depp.

The market price of his paintings has been growing over the years.  At a Sotheby’s New York sale in 2017,  his painting “Untitled” was bought by Japanese billionaire collector Yusaka Maezawa at $110.5  million.

Jean Michel Basquiat was an American artist of Haitian and Puerto Rican descent and ‘Warrior’ is one of the most energetic of the artist’s paintings when he had achieved his full artistic maturity. He depicts the combative warrior with blazing red eyes, a black man wearing a crown of thorns with obvious Christian undertones and shiny long sword reminding one of a medieval knight going for the Crusades.

The painting depicted in various media including oil stick, acrylic, and spray paint with its wood panel support gives a three-dimensional effect. It symbolises the struggles of a black man in a white-dominated society a common theme of Basquiat’s paintings with his strong stand against colonialism and inequality.

The influence of Picasso, Abstract Expressionist masters, and African Tribal art can be seen in his paintings.

In London, Banksy’s ‘Game Changer’ depicting a young boy who has discarded his Batman and Superman toys for that of a uniformed nurse wearing a mask was sold for £16,758,000. The one square meter size black and white painting has only the Red Cross symbol emblazoned in red on her chest. It was installed in Southampton Hospital in the south of England in May 2020 as a gesture of thanks towards the staff during the first wave of the COVID-19 pandemic.

The proceeds of the sale will be used to support University Hospital Southampton staff and patients and other health organisations and charities in the UK.

According to co-head of the 20th Century Evening Sale, Keith Gill, Picasso’s meeting with Marie “was the start of an intense love affair that would result in some of the most majestic paintings of Picasso’s career”. “Over the next decade, the artist painted Marie-Thérèse obsessively. First clandestinely and later, as their relationship developed, as a sensual, curvaceous being.”

Gill said, ‘This painting is an intensely private portrait of his love affair with his mistress and his art’. ‘If you are a Picasso collector, you want to own a Jacqueline portrait,’ adds Gill, ‘just as you would want to own a Marie-Thérèse or a Dora Maar, because they are windows into the artist’s life at that time.’

‘At the time of the Jacqueline portrait,’ adds Gill, ‘Picasso was looking back at Old Master painters, engaging with artists such as Delacroix and Manet.”

“The personalities that emerge from the two portraits are very different: where Marie-Thérèse is soft and sensual, Jacqueline is regal and commanding, as if the artist is in thrall to his new wife,” Gill added.

French artist Jean Fautrier’ Pieges (Traps) from 1946 sold at £4,522,500, setting a new world record for the artist at auction. According to Christie’s the work inspired by wartime horrors depicts a sinuous, enigmatic form emerging from mists of luminous blue and sepia shadow. It glows as if backlit; dark strokes hint at the curves of a reclining nude, a billowing shroud, or a face seen in profile. Wisps of violet flicker through it like flames. Indian artists too, fetch high prices in the art market today.

The painting with its layered shades of pigments of blue and a distinct red dot is supposed to have been inspired by the artist’s interest in spiritualism and Zen philosophy.

According to Saffronart, Gaitonde’s painting got the highest value for an Indian painting ever.

It broke the artist’s own record set in September 2020 when another oil-on-canvas made in 1974 sold for Rs 36.8 crore at an auction by Pundole’s.

The work was sold from the collection of Aditi Mangaldas and Aditya Mangaldas, the children of industrialist Harshavadan Mangaldas who had it for more than four decades.

The total sales value  of sales at the auction was according to Saffronart   was Rs 70.8 crores (USD 9.8 million),

During the COVID-19 pandemic, fast-paced bidding was done on the phone, the website, and via the Saffronart mobile app from around the world.

It Is A Mayurbhanj Girl’s Sacred Responsibility To Promote Our Dance Tradition,…