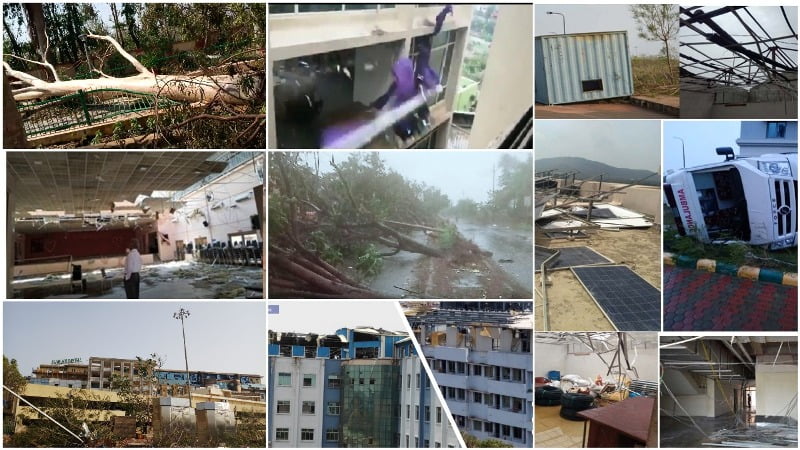 Bhubaneswar: Extremely severe cyclone Fani ripped through Odisha on May 3, causing extensive devastation and sparing none. Even as the state government is busy counting the losses and assessing the damage caused by the severe cyclonic storm, Odisha Bytes visited some major educational institutions in the Odisha capital to bring you their experience post the disaster.

IIT-Bhubaneswar, which founds itself near the eyewall of cyclone Fani, suffered extensive damage and it included civil and electrical infrastructure at all its schools on its permanent campus at Argul. The magnitude of tree loss has been colossal while a crane stationed near an under-constructed structure of the auditorium overturned with wind speed crossing 100kmph. The administrators pegged the preliminary loss at around Rs 8 crore. “The devastation was more than expected, but our scientists did a great job in predicting the exact course of the cyclone,” said IIT-BBS Director RV Raja Kumar.

Another premier institute, NISER, too faced the extreme wrath of the cyclone and the institute suffered a whopping loss of about Rs 70 crore. The institute’s valuable scientific equipment were damaged and the auditorium building complete devastated by the brute force of the cyclone. A mobile tower inside the campus twisted and collapsed and books in the library, the green house, the logo of the institute and also the residential buildings were damaged. “The research work has been stopped for now because of the destruction,” said a senior institute administrator.

Spread over 100 acres, Utkal University in the heart of the city also bore the brunt of the severe cyclonic storm, which triggered high-velocity winds. The green cover on the campus was almost wiped out and hostels, academic and residential building were damaged. “The preliminary loss of property has been estimated at around Rs 109 crore, but it may go up in the final report,” said a senior varsity administrator.

Fani left behind a trail of devastation at Rama Devi Women’s University, the lone women’s varsity in the state. The state government’s preliminary report puts the loss at around Rs 13.09 crore. The entire boundary wall collapsed and electric poles, solar panels and overhead water tanks were damaged as copious rain and super-strong winds battered the Odisha capital on May 3. “The boundary wall can be counted as a major damage the varsity suffered in Fani. The technical team of the state government assessed and came up with the loss report. Reconstruction of the damaged structure will begin soon,” said RD Vice-Chancellor Padmaja Mishra.

The KIIT and Kalinga Institute of Medical Sciences (KIMS) were also at the receiving end of Fani and the institute pegged the loss at an estimated Rs 150 crore. According to sources, Fani caused extensive damage to the infrastructure of the institute and a good number of trees planted was also uprooted. The KISS library has also been severely damaged. Entrance gates of several of its departments, including that of NIFT inside KIIT, also bore signs of the devastation.

6. Siksha-O-Anusandhan (SOA) Deemed to be University

A number of medical and other educational institutions run by SOA suffered damage in Fani. The deemed university officials have pegged the loss at around Rs 30 crore with extensive damage to the medical equipment at IMS and SUM Hospital. The damage to the administrative building of the varsity at Jagamara has been colossal. A high-mast light pole at the Institute of Technical and Education Research under the varsity was uprooted. The laboratories of the campus were also damaged in the cyclonic storm.

The decade-old Centurion University of Technology and Management also felt the brute force of the cyclone with damages estimated at around Rs 30 crore. The campus of the institute at Jatni lost about 2,500 trees and 1.5 lakh square feet of area. The main gate of the institute, along with a three kilometer of boundary wall, was also damaged by the strong force of the winds. “The soul and heart of the campus are gone,” said president of the varsity Mukti Kanta Mishra, adding that ten years of hard labour went down the drain within a few hours.

The cyclonic storm teared though CSIR IMMT, located in the heart of the city at Acharya Vihar, bringing down the compound wall of the institute. The pre-coated GI sheets of labs and sheds were blown away and tar sheets over the roof of many residential quarters damaged while glass partitions of many research buildings were shattered. Water supply pipeline networks have developed cracks at several places after trees uprooted and fell on them. Overhead water tanks were also blown away. “NDRF teams provided help in cutting huge uprooted trees. All staff members of IMMT joined hands to clear the trees from the main roads and residential houses immediately after the cyclone,” said IMMT Director S Basu.

Five Die Of ‘Sunstroke’ In Odisha