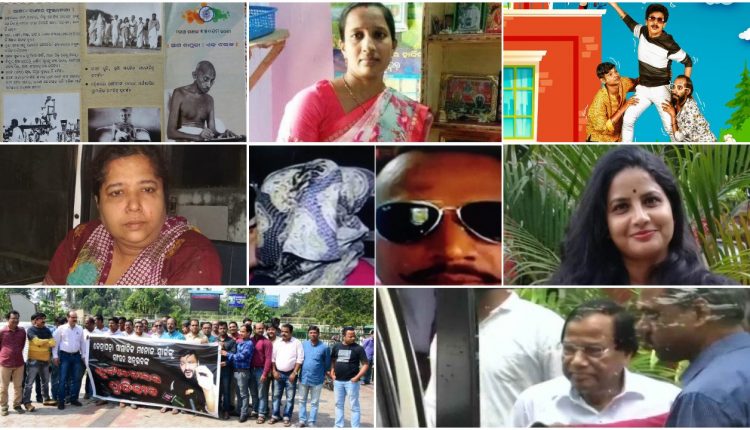 As 2019 draws to an end, here’s a sum up of news that made the otherwise laid back Odias react with passion to the incidents that threatened their peace of mind and overall social fabric.

2019 happens to be the year when both parliamentary and state assembly elections were held, and as happens with elections lots of controversy arose around issues that could be given political overtones.

• The Kunduli rape case earns the dubious first place when one takes into account controversies that shook Odisha in 2019. A tribal minor girl from Sorisapadar village in Kunduli of Koraput was allegedly raped by four unidentified men wearing fatigues on October 27, 2017. She allegedly committed suicide on January 22, 2018, following alleged torture and harassment by police. The victim’s brother moved the Supreme Court, demanding a CBI probe saying he had no faith in the investigation by the state police. This led to attack and counter attack by the political parties.

• The state government found itself in an awkward position with the opposition training guns at it over the death of VLW and in-charge Panchayat Executive Officer (PEO) of Haridaspur in Jajpur district, Smitarani Biswal. She was found hanging in a private guesthouse owned by Haridaspur Sarpanch’s husband Rupeash Bhadra at Baligari on October 16. She had reportedly gone to the guesthouse to freshen up after disbursing old age pension to beneficiaries at Haridaspur.  Rupesh, alleged to be a BJD leader, has already been arrested for abetment of suicide. But the BJP has been demanding a CBI probe, claiming that Biswal was raped and murdered and did not take her own life as claimed by the police. Chief Minister Naveen Patnaik later slammed the BJP and the Congress for doing “inhuman politics” over her death and said his government will ensure justice is done in all cases related to women and children.

• Sex videos purportedly featuring BJD’s Lok Sabha candidate, now member of Parliament, Chandrani Murmu went viral just before elections. Soon after Chandrani was handpicked by the BJD to be their candidate for Keonjhar Lok Sabha seat, an objectionable video with her image, alleged to have been morphed, went viral on social media. Investigations led to five people allegedly involved in the crime. Three belonged to a political party’s IT cell and the other two were journalists, who were soon arrested.

• Deepali Priyadarshini Jena, a lawyer, was found hanging from the ceiling of her room under mysterious circumstances inside her rented house at Indira Colony under Dhauli Police near Bhubaneswar. A male friend of hers, Bikram Keshari Mishra, who had gone down to meet her, alerted Deepali’s sister that she has locked herself in the room and was not responding. Deepali’s sister rushed back home to find her body hanging. Bikram became the prime suspect, after he went missing soon after.

• Actor and Lok Sabha MP Anubhav Mohanty stirred up quite an uproar, in June soon after getting elected to the Lok Sabha, when he was accused of sexually harassing a woman journalist, Sashmita Acharya, who had gone to his residence to complain against Anubhav’s brother for passing lewd remarks at her. The Odisha police booked a complaint against the actor. The Kendrapara MP again landed in a soup for allegedly misbehaving with a journalist of a local news channel who approached him for his comments after a project announcement event for Baladevjew Temple at Kendrapara Collectorate. The actor-turned-politician took to his social media account and posted a 1 min 29-sec video, where he expressed his regret for the unfortunate incident.

•  Naveen Patnaik-led Odisha government triggered controversy in November after a two-page booklet published by School and Mass Education Department stated that Gandhi “died due to accidental reasons in a sudden sequence of events on January 30, 1948, at Delhi’s Birla House”. Aama Bapuji: Eka Jhalaka (Our Bapuji: A Glimpse) published on the occasion of 150th birth anniversary of Mahatma Gandhi presented a brief account of his teachings, works and links with Odisha. Following criticism from various quarters, the booklet was withdrawn and the government later clarified that “the wrong information happened unwillingly”.

•  BC Sethi, the deputy leader of the Bharatiya Janata Party (BJP) in the Odisha Assembly, stoked a controversy when he said “Muslim women dominated the red-light areas of Mumbai and Kolkata” while speaking in support of the “triple talaq” bill. He quoted “survey reports” from magazines and newspapers during Zero Hour to justify his claim even as members of the Congress and the ruling Biju Janata Dal (BJD) demanded that the statement be immediately expunged from the records.

• Ollywood actor-comedian Papu Pom Pom was in news again in 2019 for all the wrong reasons. The poster of his movie, ‘Mr Kanhaiya’, in which seven girls were shown tied to a leash held by Papu, drew flak from women’s rights activists and people on social media. The controversy over the “misogynistic” poster took an ugly turn when sprinter Dutee Chand threatened legal action against him for his outbursts against her sexuality in an audio clip that went viral after she criticized it for being distasteful. Papu later apologized to her on television.

• In another bizarre case, a woman, Anita Mishra from Konark, was detained by the Lingaraj police on January 20. She was accused of stabbing to death another woman, Alakananda Das from Balasore’s Basta, with whom she lived in a rented house in Bhubaneswar’s Gauri Nagar. Reportedly it was a crime of passion. The women were said to be lesbian partners and Anita committed the crime on learning that Alakananda was going to marry a man soon.

• Former Odisha Cricket Association (OCA) secretary Ashirbad Behera, was arrested by the CBI on September 19, from his Cuttack residence on charges of links with Artha Tatwa (AT) group, a Chit Fund firm. According to the investigation reports, Behera, as OCA Secretary, promoted the dubious firm and cheated public by promoting the chit fund firm’s credibility.

• Another gang rape, hit the headlines, when a woman lodged a complaint with Puri’s Kumbharapada police station on December 2, alleging gang rape by four persons at a cop’s official quarters in Puri district. Among the accused, was a dismissed police officer and a CRPF jawan. The victim, who claimed to be a minor, managed to grab hold of the wallet of one of the accused while being assaulted. She managed to escape. The two accused, later identified as police constables Jitendra Sethi and Rajesh Sethi were arrested.