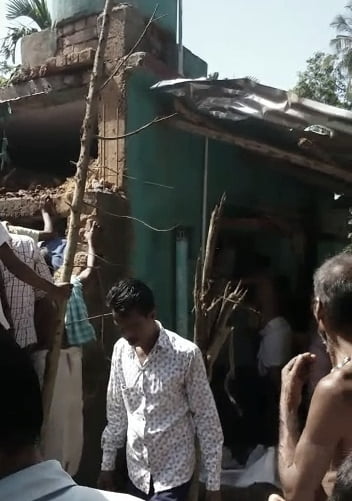 Bhubaneswar: Two persons were killed and as many seriously injured when the crackers they were preparing exploded in a house at Nuasahi village, on the outskirts of the city, on Thursday morning.

The deceased have been identified as Gyana Ranjan Mishra and his wife Jhunamani Mishra.

According to sources, the family members were preparing crackers in their house for the ensuing Diwali when it suddenly went off. The fire later spread to a stockpile of crackers kept inside the room.

While the couple died on the spot, two others sustained serious injuries

On being informed, a fire tender and a team of Banamalipur police rushed to the spot and admitted the injured to the primary health centre (PHC) at Athantara.

The roof and walls of the building collapsed under the impact of the explosion, the sources added.

A couple engaged in making firecrackers died in an explosion at Nuasahi of Banamalipur village, on the outskirts of the city.

Another person, seriously injured in the cracker blast, has been admitted to a private hospital in Bhubaneswar.

On the other hand, fire fighters have been engaged to douse the flames