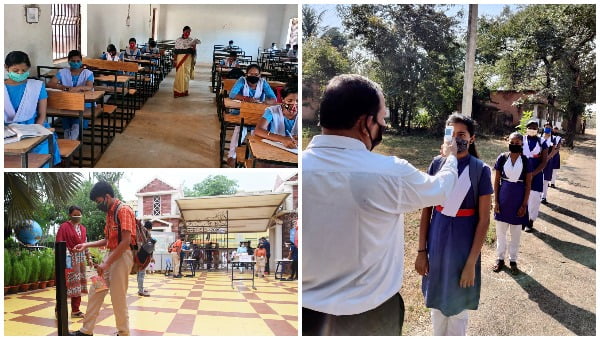 Bhubaneswar: A consent letter with no option for online classes, another putting the entire onus on the parents if students contract COVID while attending school. Another veiled threat: Students will not be allowed to take exams in case of shortage in attendance (less than 70 per cent).

Are parents being arm-twisted into sending their wards to school?

Schools across Odisha reopened on July 26 almost after a gap of almost three months with the state government allowing physical classes for Class X and XII students by following COVID guidelines.

On the first day, most schools saw 50 per cent attendance. Since attending classes is the prerogative of the students and their parents, most of them are still reluctant, particularly in Bhubaneswar where the daily caseload is showing no signs of abatement.

A parent of a student of Loyala School told Odisha Bytes that though she sent her son to attend the physical classes, many are still hesitant and pushing for online classes. “Few students attended the classes in the first week, following which the school has decided to conduct both offline and online classes from today,” she said.

She, however, expressed apprehensions about how the classes will be conducted in both modes. “How will a teacher concentrate on students while conducting the class in both online and offline mode?” she questioned.

The parent asserted that the teachers should ensure the students stick to the COVID protocol as there is every possibility of them throwing caution to the winds.

However, Ruchika High School has bluntly told the parents there would be no online classes and students would not be allowed to enter the premises without the consent form duly filled.

The school, however, has assured parents that the premises is being sanitized twice, teachers are fully vaccinated and classes will be held in batches of 12 students each so that social distancing can be maintained.

Similarly, a branch of Saraswati Vidya Mandir in the city has stressed 70 per cent attendance because of which parents are forced to send their wards to school. More so, since online classes have been discontinued. “Though the school had assured us that they would follow all COVID guidelines, teachers and students can be seen without masks during the class hours. We are also not satisfied with the seating arrangements,” said a parent.

This is contrary to the Odisha government’s guidelines, which categorically states that schools should encourage online education and no student should be coerced into attending classes.

The consent form of Kendriya Vidyalaya-1 says parents should not initiate any legal action if their wards contract the virus. All medical and hospital expenses of an infected child have to be borne by the parents and the school should not be held liable for it.

Such letters raise doubts in the minds of parents and also puts under the scanner the government’s decision, which many had termed as hasty.

Sarat Kar, the spokesperson of city-based SAI International School, informed that the guidelines issued by the government nowhere mentions about consent form. “We reopened our school on July 26 and students who attended classes were assumed to have the consent of the parents. However, the classes were discontinued for exams, which the students are taking in online mode,” he said.

Kar further said they would conduct both online and offline classes and only those interested can come to school for classroom teaching.

The government decided to reopen schools as online classes were not proving effective. Only 40 per cent students could be reached through this mode. Those in the interior pockets were badly affected due to lack of adequate access to the internet and smartphones to attend classes.

However, it noted that online/distance learning should continue to be the preferred mode of teaching and encouraged. “Where schools are conducting online classes, and some students prefer to attend online classes rather than physically attend school, they may be permitted to do so,” the guidelines said.

Online and classroom learning will go in tandem with each other and should continue to share timelines and daily schedules to ensure synchronization, it added.

Educationist Pritish Acharya, however, said that offline education should be encouraged. “When the government has decided to reopen schools, the students should be encouraged to attend classes. This is more so since online classes have not been very effective,” he said.

Acharya further said that the paraphernalia in the guidelines will dissuade children from opting for classroom teaching. “The option for both online and offline classes is given as parents are still apprehensive about allowing their wards to school. But it will not be feasible for teachers to take classes in both modes. Many schools are plagued by a shortage of teachers and this dual option will only put an extra burden on the existing staff,” he said.

Other classes should also be resumed in a phased manner, he added.

“There is no alternative to classroom teaching. But does the situation permit for sending children to school in Bhubaneswar? The daily positive cases in the state capital continue to hover between 300 and 400. Though the government has further relaxed the lockdown norms, it has decided to continue with the weekend shutdown,” pointed out another parent.

“If a child gets infected, there is a possibility that the entire family will contract the virus. The danger of a third wave is still lurking and Kerala as such is witnessing a rise in cases. Under such circumstances, offline classes should be postponed till the situation is brought under control,” she averred.

Mass and School Education Minister Samir Dash said that schools should ideally conduct both online and offline classes. “Since the guidelines say that the children are required to attend classes in consultation with parents, the school must be sending consent forms for the same,” he added.