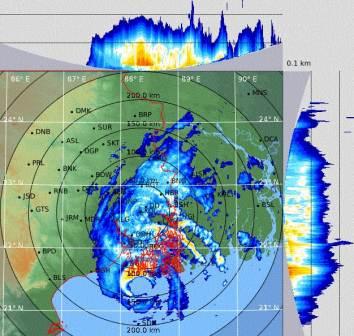 Speed of the cyclonic storm: 15 kmph

Time and place of landfall: The process of landfall has begun. The cyclonic storm will cross West Bengal-Bangladesh coasts between Sagar Islands and Khepupara across Sundarban delta by 11.30 pm on November 9.

Expected wind speed during landfall: Maximum sustained wind speed of 110-120 kmph with gusting up to 135 kmph.

Wind speed in Bay of Bengal: Gale wind speed reaching 130-140 kmph with gusting up to 155 kmph over northwest Bay of Bengal is very likely to decrease gradually and become 115-125 kmph gusting to 140 kmph by the evening of November 9.

Sea condition: High to very high along and off north Odisha coast till night on December 9.

Warning for fishermen: Total suspension of fishing operations till morning of November 10. Fishermen are advised to not to venture into sea along and off Odisha coast and deep sea area of north and adjoining west-central Bay of Bengal till November 10.

Port warning: Local cautionary signal no-3 hoisted in all ports of Odisha.