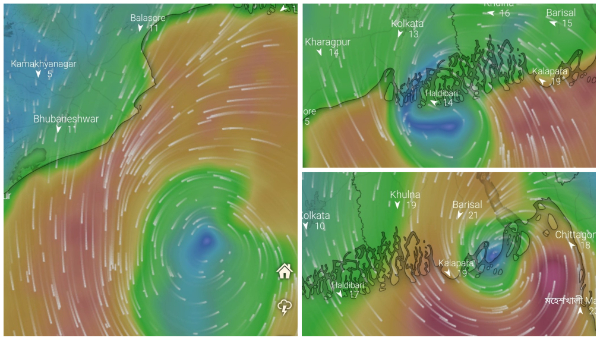 Bhubaneswar: With a low-pressure area forming over the southeast and adjoining east-central Bay of Bengal on Thursday, all eyes are on India Meteorological Department (IMD) to make an announcement about the intensity, path and windspeed of the anticipated cyclone, which is likely to take shape around October 24.

The MeT office had earlier said that a detailed and accurate prediction on the cyclone can only be made once the system turns into a low pressure and then a depression.

However, there has been a large variation among the different models with regard to the track and peak intensification of this system.

On Thursday, the European Centre for Medium-Range Weather Forecasts (ECMWF) indicated that the possible Cyclone may pass close to the Odisha coast while making landfall at Haldibari in West Bengal. American Global Forecast System suggested landfall in Chittagong, Bangladesh.

“The landfall point based on ECMWF, NCUM and NCEP-GFS models is varying between West Bengal (Digha) and Bangladesh (Pather Ghat) coast. Landfall time is varying between 25/0000 Coordinated Universal Time (UTC) to 25/1200 UTC from these models,” the Regional Specialised Meteorological Centre (RSMC), New Delhi said on Wednesday.

The IMD GF, on the other hand, indicated landfall over Odisha around 28/0000 UTC.

Weather scientist Sarat Sahu had told the media that Odisha in all probability will feel the impact of this post-monsoon cyclone, which may bring more rain. “If the landfall takes place Odisha and North Andhra Pradesh then the southern districts of the state will be affected. If the system moves along the Odisha-West Bengal border then all coastal areas will experience heavy rainfall,” he said.

He further said an accurate prediction on its intensity, path and wind speed can only be made around October 21-22.

This system will be named ‘Sitrang’ if it intensifies into a cyclonic storm.

Notably, the MeT office has sounded heavy rainfall warning for three districts – Puri, Kendrapada, and Jagatsinghpur – on October 23. The intensity is likely to increase further, it added.

Meanwhile, the Odisha government has put seven coastal districts, which are more prone to the potential cyclone, on alert. Collectors of Ganjam, Puri, Khurda, Jagatsinghpur, Bhadrak, Kendrapara and Balasore districts have been asked to remain prepared for any adverse situation if a cyclone hits the Odisha coast.