The Changing Track Of Possible Cyclone ‘Sitrang’; Is It Moving Away From Odisha? 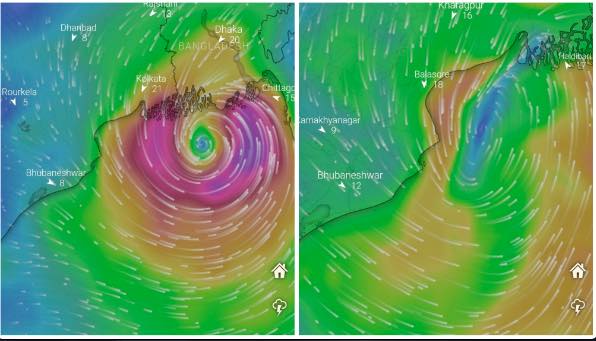 Bhubaneswar: After slipping from the clutches of the seasonal rains, the eastern coastal states are likely to run straight into a cyclone this week. With the cyclonic circulation expected to intensify into a low-pressure area over the Bay of Bengal in the next 24 hours, the India Meteorological Department (IMD) may soon come up with a detailed report on the anticipated cyclone, which is likely to form over westcentral Bay of Bengal by October 24.

“No forecast has yet been made on its intensity and the state it would hit. A clear picture would emerge after formation of low pressure and subsequent depression,” IMD DG Mrutyunjay Mohapatra told the media on Tuesday.

The system is likely to move in west-northwestward direction and concentrate into a depression by October 22 morning.

Different weather models have been indicating different paths for the possible cyclone.

On Wednesday, the model of the European Centre for Medium-Range Weather Forecasts (ECMWF) indicated that the possible cyclone may make landfall in Haldibari area of West Bengal while the American Global Forecast System (GFS) model showed likely landfall near the West Bengal-Bangladesh coast. These models had suggested north of Balasore and Digha as the possible landfall sites the previous day.

Also Read: Low Pressure In 24 Hours; Bay Of Bengal Likely To Churn Out Storm This Week

According to the Regional Specialized Meteorological Centre (RSMC) bulletin, the landfall point based on ECMWF, NCUM and NCEP-GFS models varies between West Bengal (Digha) and Bangladesh (Pather Ghat) coast. Landfall time is varying between 25/0000 Coordinated Universal Time (UTC) to 25/1200 UTC from these models.

The IMD-GFS model, however, is indicating landfall over Odisha around 28/0000 UTC, the RSMC added.

Weather scientist Sarat Sahu said that Odisha in all probability will feel the impact of this post-monsoon cyclone, which may bring more rain. “If the landfall takes place Odisha and North Andhra Pradesh then the southern districts of the state will be affected. If the system moves along the Odisha-West Bengal border then all coastal areas will experience heavy rainfall,” he said.

He further said an accurate prediction on its intensity, path and wind speed can only be made around October 21-22.

The Odisha government has already asked district magistrates and senior officials of coastal areas have been asked not to leave their respective headquarters for one week in view of the impending cyclone.

According to private forecaster Skymet, mid-October and the second half, as such, offer a conducive and favourable environment for cyclogenesis. “Since the weather system will be positioned rather deep in the ocean, it will encounter support of environmental conditions, so essential for sustenance and growth.  Its rapid accentuation is anticipated and extended sea travel will further raise the heat potential,” a report said.

Meanwhile, AccuWeather lead international forecaster Jason Nicholls tweeted that low pressure is expected to form over the eastern Bay of Bengal over the next couple of days then can strengthen to depression and cyclonic storm this weekend. “Cyclone can make landfall in north Andhra Pradesh, Odisha or Bengal early next week. Storm can peak as a severe cyclonic storm or very severe cyclonic storm,” he added.

This system will be named ‘Sitrang’ if it intensifies into a cyclonic storm.