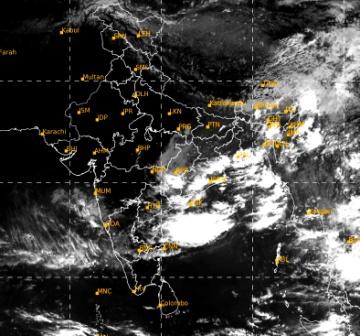 Bhubaneswar: While heavy rainfall continues in most parts of south coastal and north Odisha, the India Meteorological Department (IMD) has said that a low-pressure area brewing over the Andaman Sea is most likely to concentrate into a cyclonic storm by the second week of October.

Talking to the media on Monday, director of the Meteorological Centre, Bhubaneswar HR Biswas said that a low-pressure area is most likely to form over the Andaman Sea off the Thailand coast by October 9. The low-pressure will move in the north-west direction and concentrate into a depression off the north Andhra Pradesh and south Odisha coast. However, the IMD will be able to forecast whether the depression will further intensify into a cyclonic storm in 3-4 days after the formation of the low pressure.

According to senior meteorologist Surendranath Pasupalak, the low-pressure over the Andaman Sea will move along the Bay of Bengal for two days towards the north-west and gather more strength and concentrate into a depression. As the depression will then change its course and move in the north-west towards the north Andhra Pradesh coast near Vishakhapatnam, there will be no landfall in the south Odisha coast.