When The Less Privileged Turn Bystanders in Politics 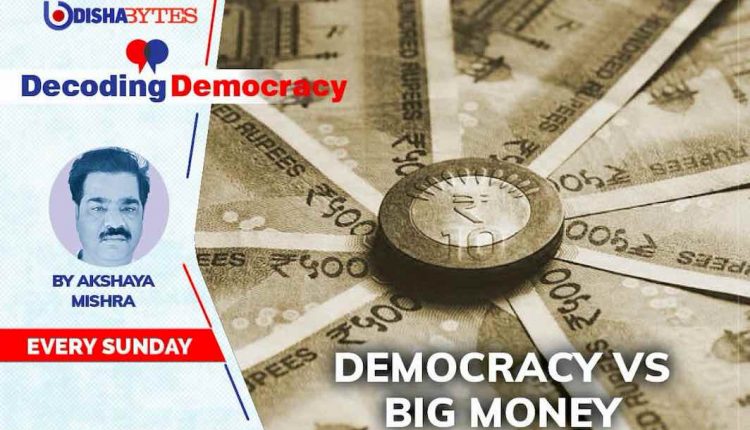 In every country, just about, the disproportionate economic clout of those at the top has provided these individuals with wildly disproportionate influence on their countries’ political life and on its media; on what policies are pursued and whose interests end up being ignored.”

Politics is a game multi-millionaires play. The entry gates are firmly shut for the poor and even the reasonably well-off. Once inside the gate, the price of staying in the game is heavy. Unless, of course, you look at it dispassionately and turn it into an opportunity with a great return on investment. As politics becomes a playfield of big money, it becomes a potential source of big-ticket corruption too. People investing crores to win an election need more money for the next, and they have to get innovative. And it goes on.

Money has been a big factor in the pervading sense of alienation among ordinary people from the idea of democracy. As a career option, politics, where democracy plays out in all its magnificence and ugliness, is virtually a no-go for them. They hardly have the satisfaction of electing an independent candidate they think is the best. The latter simply may not have the resources to fight party-backed candidates. The choices the parties throw at them are more often than not uninspiring. In any case, they know whatever they feel doesn’t count. It won’t change the reality of elections. And money will finally win.

Now, look at the numbers. At least 475 of the 542 members of the 17th Lok Sabha are crorepatis, according to a study conducted by Association of Democratic Reforms (ADR), a non-partisan organisation working in the area of electoral reforms. That is close to 90 per cent, compared to 58 per cent in 2009 and 82 per cent in 2014. As many as 83 per cent of candidates in the fray in 2019 both from the BJP and the Congress declared assets over Rs 1 crore in their affidavits, an ADR report said. The median asset for the former was Rs 4 crore and the latter was Rs 4.9 crore. Discount the fact that the candidates may not have been fully honest in their declarations, the numbers are still intimidating.

They make it obvious that politics in general and electoral politics, in particular, have erected a class barrier, making it impossible for people with limited means to reach the country’s apex law-making body. Since the representatives share similar class attitudes and interests, they are less likely to be responsive to the demands of the underclass. The latter is now little more than bystanders in the democratic process. If they feel distanced from the political process, in which theoretically they play the central role, it is not difficult to fathom why.

A little more number crunching to press home the point. At around Rs 60,000 crore, the general election of 2019 was the costliest in India’s history. It beat even the US election of 2016 by a good margin. The cost of elections has gone up six times in a span of 20 years. While the Election Commission caps spending per Lok Sabha constituency at Rs 70 lakh (for big states), in more than 80 constituencies it went close to Rs 50 crore each, says a survey conducted by the Centre of Media Studies. The average spending per Lok Sabha constituency involving all candidates was Rs 100 crore. Of course, the numbers would vary from one constituency to the other. In such a scenario, it is not surprising that even parties with deep pockets would expect candidates to manage a big chunk of their expenses.

Earlier in the evolutionary history of democracy, positions in the decision-making bodies were reserved for the privileged, which included the often interchangeable categories aristocracy and moneyed elite. They sought to maximise the benefits accruing out of democracy for themselves and had a vested interest in keeping lay people out. We seem to have reached a similar situation, the only difference being they occupy the positions of privilege through popular mandate. Unlike earlier, they can claim legitimacy to their positions while making decisions that are not always in the interest of people.

The yawning income inequality between the rich and the rest is proof that a travesty of representative politics has settled in. The poor see no prospect of improvement of economic condition in their lifetime and the middle class. the biggest defenders of democracy feel it has stagnated while the rich are getting richer. Growing automation is ensuring that jobs are lost or become insecure. If this is fanning the anger of people across the world and forcing radical political changes, it is not surprising. Throughout history, economic despondency has been the driving force behind big major changes.

The role of money in politics is a complex topic, encompassing everything from corporate funding of elections to bribing of voters during election time. Since the limited focus of this series is the alienation of people from democracy, we would not go deeper into them. However, we must mention that all have combined to ring-fence the privileged from others. The overwhelming sentiment is that the ruling class is gaming the system in its favour. If it continues then we might witness more radical shifts in politics.