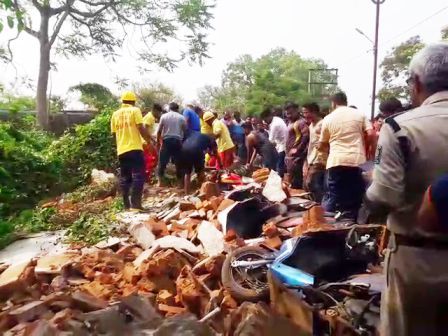 Dhenkanal: The Dhenkanal district administration on Sunday announced an ex-gratia of Rs 25,000 each to the family of the four vegetable vendors killed after a portion of a wall of a rice mill collapsed at the Alasua weekly haat in the town in the morning.

The announcement was made by the district collector, Nikhil Pavan Kalyan.

The deceased have been identified as Sangram Sahu of Chainpur, Rama Chandra Sahu of Gengutia, Abhimanyu Biswal of Gurjang and Mayadhar Mallik of Sidhapal. Their bodies were handed over to their family members after post-mortem at the district headquarters hospital.

Meanwhile, of the seven injured persons, three were shifted to SCB Medical College and Hospital in Cuttack after their condition became critical.

According to locals, the construction of a vending zone for the weekly haat was underway at Alasua for the past two years. The work was, however, still incomplete due to inordinate delay in construction work by the local contractor. Had the vending zone come up in the area withing the scheduled time frame, such an unfortunate incident could have been averted, they claimed.