Did TMC Candidate Threaten ‘Everyone’s Got Mothers & Sisters At Home, Think Before You Vote’ 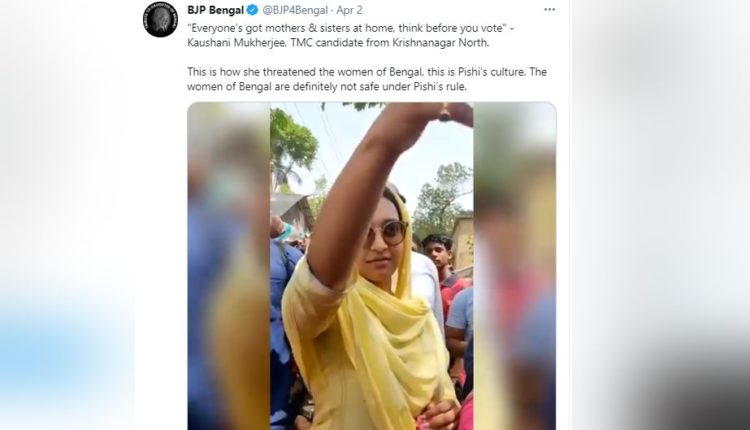 With the election campaign heating up in West Bengal, BJP’s Bengal handle has tweeted a video of actor and Trimnool Congress candidate Koushani Mukherjee where she can be heard saying, “Everyone’s got mothers & sisters at home, think before you vote.”

It was also shared by Kreately.in, which is known to be a right-wing propaganda website.

However, Koushani claims that this is a classic case of rearranging parts of a speech to intentionally mispresent facts.

She has uploaded the full video where she can be heard saying, “Look… Young boy… Hey come here… are you from BJP?? Everyone has Mom and Sister at home. Think before you vote. Think about the safety of your mother and sister and then vote. Bengal won’t be safe if Didi (Mamata Banerjee) won’t be there.”

She also uploaded a video clarifying her statement, “West Bengal tops the list when it comes to women’s safety. BJP is saying that women are not safe in Bengal. This is contrary to the report of the central government. BJP IT cell is showing a part of what I said. What I actually said that give the vote keeping in mind the safety of women. Women are not safe in UP, we have seen what happened in Hathras. If BJP comes to power in Bengal, women won’t be safe here. So think before you vote, and don’t fall into the traps laid by BJP”.

Why Phone Cases Turn Yellow & Remedies To It

Fact Check: Can Anaesthesia Cause Deaths In Vaccinated People?