Driven Away From Chhattisgarh, Locust Swarms Return To Madhya Pradesh 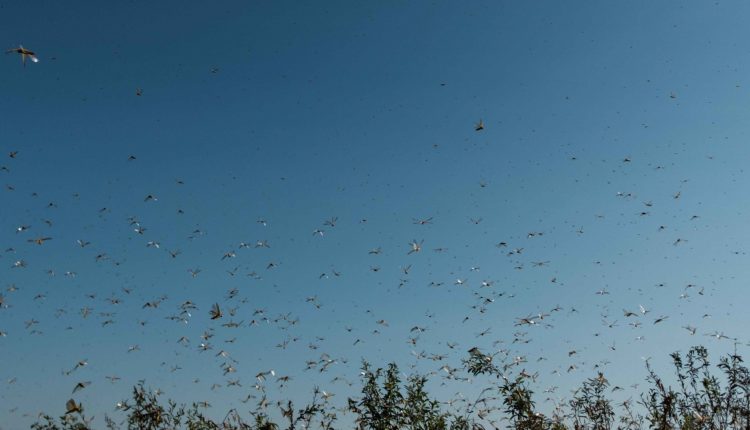 Bhubaneswar: The swarms of locusts, which had arrived at the Bharatpur reserve forest in Koriya district of Chhattisgarh on Monday morning, have left the area and returned to Madhya Pradesh on Tuesday.

Informing this to the media, Deputy Director, Agriculture of Koriya district said the locust swarms have entered Jaisinghnagar in Shahdol district of Madhya Pradesh.

The swarms comprising over one crore locusts with a stretch of 3 km had arrived in the Bharatpur reserve forest from Madhya Pradesh on Monday.

However, the villagers living in the forest periphery managed to drive them out by bursting crackers and beating drums while the Fire Service personnel killed thousands of locusts by spraying pesticides.

Notably, the Food and Agriculture Organisation (FAO) of the United Nations had told the Centre this week that several successive waves of invasions by swarms of locusts can be expected until July in Rajasthan with an eastward surge across northern India as far as Bihar and Odisha followed by westward movements and a return to Rajasthan on the changing wind associated with the monsoon.

It has also said that the locust swarm is most likely to enter the western Odisha districts of Bargarh, Sundargarh, Sambalpur, Kalahandi and Nuapada between June and July 15.

Mi Laptop To Be Launched In India On This Date