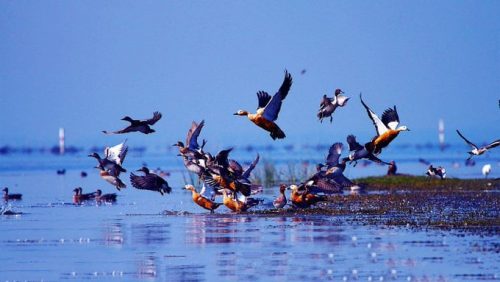 Cuttack: The Orissa High Court has advised the state government to use the solar or battery powered boats to prevent disturbance of migratory birds coming to Chilika lake.

The High Court issued the advisory on Monday after hearing a Public Interest Litigation (PIL) filed by environmentalist Dibakar Behera regarding fall in the number of migratory birds to the lake, particularly Mangalajodi over the years.

The court asked the Fisheries and Animal Resources Development department to submit is reply on the matter. On the petitioner’s information that the nesting process of the birds was disturbed due to noise pollution caused by the motor boats, the court advised to use battery and solar boats.

The matter has been posted to January 18 for next hearing.

It may be noted that the number of migratory birds visiting the largest brackish water lagoon in Asia registered a major drop this year. During the annual bird census conducted in January, total 10,74,173 birds of 107 water bird species and 37,953 of 76 wetland dependent species were counted in the entire lagoon which is spread over Puri, Ganjam and Khorda districts covering an area of around 1,100 sq km.