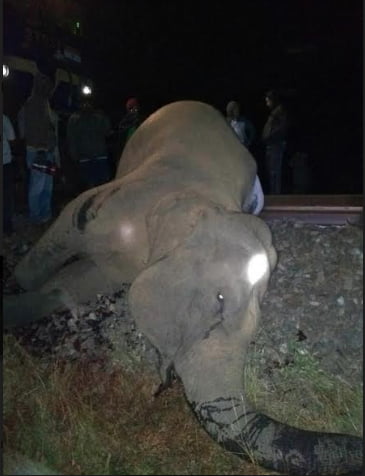 Keonjhar: The Forest department has registered a case against the loco pilot of a goods train in connection with the death of a female elephant in Naranpur Forest Beat House area under Sadar Forest Range of Ramachandrapur block in Odisha’s Keonjhar district on Wednesday night.

He said the Forest department had informed the Railway control room at Khurda at 6.20 pm to issue a caution to the loco pilots to limit the train speed in view of the movement of the elephant herds along the railway track. Acting on the information, the authorities had issued the order for train drivers at 6.48 pm.

“The Railway authorities reached the mishap site this morning to probe whether the loco pilot had abided by the caution order. The loco pilot has been detained and registered a case against him under the Wildlife Protection Act. We have also recorded his statement,” the DFO further said.

According to rules, the loco pilots are instructed to limit the train speed to 50 kmph while passing through elephant corridors between 6 pm and 7 am, he added.

Meanwhile, the Divisional Railway Manager (DRM), Khurda Road, has confirmed that the speed of the goods train has been certified 43 kmph at the time of the collision with the elephant. As per the memo received from Forest department, the speed limit of 50 Kmph was to be observed at the spot or area where elephant movement was reported. The certified speed of 43 Kmph has been found from the engine of the train which has a speedograph installed in it.

Notably, the goods train was on its way to Joda from Jakhapura when it hit a female elephant crossing the railway track. However, nine other elephants of the herd managed to escape.

Two Killed In Firing At Melody Night In Salepur