Bhubaneswar: After two days of heavy downpour at the end of September and a brief lull, the intensity of rain in Odisha is likely to increase from October 2 under the influence of an anticipated cyclonic circulation in the northeast and adjoining eastcentral Bay of Bengal.

According to the Regional Meteorological Centre, heavy rainfall is likely at one or two places in Mayurbhanj, Balasore, Kandhamal and Ganjam on September 28. Thunderstorm with lightning may also occur at one or two places in Balasore, Bhadrak, Jajpur, Kendrapara, Cuttack, Jagatsinghpur, Puri, Khurda, Nayagarh, Ganjam, Gajapati, Keonjhar, Mayurbhanj, Dhenkanal, Kandhamal, Rayagada, Koraput and Malkangiri during this period.

Yellow warning for heavy rainfall has been issued for one or two places in Gajapati, Malkangiri and Koraput on September 29. Thunderstorm with lightning alert has also been sounded for one or two places in Balasore, Bhadrak, Jajpur, Kendrapada, Cuttack, Jagatsinghpur, Puri, Khurda, Nayagarh, Ganjam, Gajapati, Mayurbhanj, Kandhamal, Kalahandi, Rayagada, Nabarangpur, Malkangiri and Koraput districts. 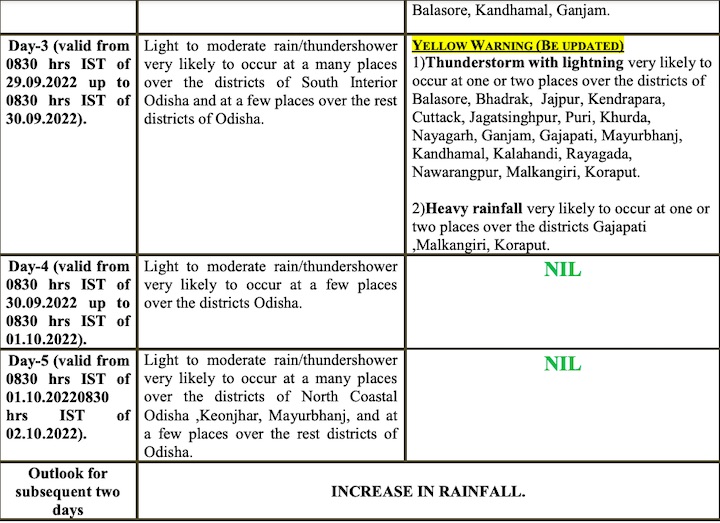 According to SOA’s Centre for Environment and Climate (CEC) here, a low-pressure area (LOPAR) is likely to form over north-west Bay of Bengal on October 2 caused by remnants of typhoon Noru in the South China Sea.

After the LOPAR is formed below Bangladesh coast, the system would move in a west-north-westerly direction towards north Odisha coast on October 3 and advance towards western Odisha the next day.

Under its influence, widespread rainfall may occur over Odisha with the districts of Jagatsinghpur, Puri, Khurda, Cuttack, Kendrapada, Jajpur, Bhadrak, Balasore, Mayurbhanj, Keonjhar, Dhenkanal and Angul likely to experience heavy rain on October 2 while heavy to very heavy rainfall could occur at one or two places along coastal Odisha.

Light to moderate precipitation is likely across Odisha from October 4 to 6 while sporadic rain could continue till October 1. Models, however, don’t indicate any further intensification of the system, it added.