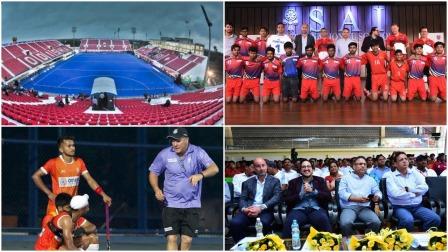 Bhubaneswar: India will play its four home matches of the 2020 Men’s Hockey Pro League at Kalinga Stadium in Bhubaneswar, said the International Hockey Federation (FIH) in a release on Monday.

The second edition of the Hockey Pro League to be played between January 11 and June 28 will feature 144 matches.

Bhubaneswar has become a hockey hub in India, having hosted a majority of tournaments including the recent Olympic qualifiers, where the Indian men’s team qualified for the Tokyo Olympics after beating Russia by 4-2 and 7-1 goals in the two-legged FIH Qualifiers on November 1 and 2.

With men’s team qualifying for the Tokyo Olympics, a three-week training camp for the Pro League tournament began at the Kalinga Stadium on Monday under the direct supervision of the chief coach, Graham Reid who will formulate the team’s strategy for the Olympics.

“As there is no major tournament, more emphasis will be given on the skill of the players rather than the team strategy in this 33-member training camp. We will also review our performance during the last season, which will help us to keep ourselves ready in the next eight months,” Reid told the media here.

A total of eight teams will participate in the Pro League Hockey. After playing against Netherlands, Belgium, Australia and New Zealand at the Kalinga Stadium, India will take on Argentina, Germany, England and Spain.

Mentioned below are the dates, time and the team against whom India will play their League match at the Kalinga Stadium.