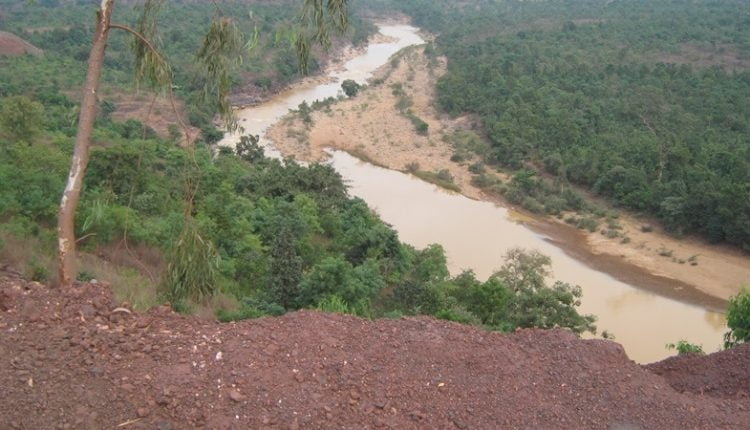 Keonjhar: Rampant mining activities and proliferating industries have not only acutely polluted but also choked river Baitarani, the lifeline of Keonjhar district, putting the lives and livelihood of the people at stake.

Considered a sacred river by the locals, Baitarani originates from Gonasika Hills in tribal dominated Banspal block at 900 metre above sea level and runs 360 km before entering the Bay of Bengal. Along its way, it is fed by 64 tributaries including 9 large ones. The catchment areas of the river receives average 1,488 mm rainfall in a year.

Baitarani river basin is the third largest of 11 basins in the state. It has a catchment area of 13,482 sq km in Orissa out of total 14,218 sq km catchment area.

Baitarani, which one of six major rivers of Odisha, is a major source of irrigation for agriculture which is the main occupation of the people. Besides cultivation, the river is utilised for fisheries.

The crystal clear water of the river meandering through hills and deep forest started getting polluted when mines and industries started operation a few years back.

In fact, the upper part of the basin is rich in minerals like chromites, iron ore, manganese, pyrophillite and quartzite. As a result, hundreds of mines have come up in the area leading to pollution.

Due to use of huge quantity of surface and ground water and generation of solid waste by the mines covering about 300 sq km area including 180 sq km of forest land, the water level has not only come down, the pollutants have made it unsuitable for human consumption.

Though the locals, particularly tribals and environmentalists have repeatedly raised their voice against unbridled exploitation of the natural resources including Baitarani water, their concern has gone unnoticed.

“Expressing its view on the issue, Justice Shah Commission has told the lessee to take immediate steps to make the river free of pollution. But, except some companies, no one has taken any remedial steps. The water has turned toxic and will cause incurable diseases in the long run as people of hundreds of villages use its water every day,” said Radhakanta Mohanta, an environmental activist.

Echoing Mahanata’s views, another environmentalist Dr Bimbadhar Behera said, “Due to massive solid waste generated from different mines and industries and soil erosion due to mass deforestation, the river bed is gradually shrinking and the river is on the way to extinction.”

On the other hand, Pusker Behera, Regional Officer, Odisha State Pollution Control Board, Keonjhar ruled out any pollution of Baitarani. “The water of Baitarani is safe. We collect water samples every month from 10 spots of rivers Baitarani, Sona, Karro, Kusei and send those to the central laboratory for test. Except suspended particles during rainy season, no such pollutant has been found in the water. While there is no polluting industry in Keonjhar, mines have taken safety measures to check pollutants from entering the river,” he said.